- November 21, 2022
This morning, I made the transition from a vibrant Twitter account of 13.9 thousand followers to ZERO followers. The journey to oblivion was quick. I thought it would hurt more, given the reluctance I felt prior at losing 14K followers, that I'd sob quietly in a dark room, waiting for overwhelming crush of nothing, but...nothing.  I was reminded of a few relevant quotes from Epictetus. 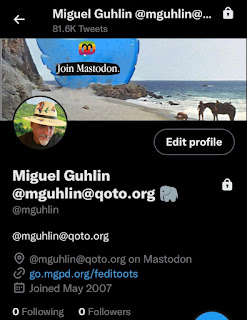 "Ask yourself: Does this appearance (of events) concern the things that are within my own control or those that are not? If it concerns anything outside your control, train yourself not to worry about it."
“Man is not worried by real problems so much as by his imagined anxieties about real problems”
Don’t demand or expect that events happen as you would wish them do. Accept events as they actually happen. That way, peace is possible.
“Under no circumstances ever say ‘I lost something,’ only ‘I returned it.’ Did a child of yours die? No, it was returned. Your wife died? No, it was returned…Why concern yourself with the means by which the original giver effects its return? As long as he entrusts it to you, look after it as something yours to enjoy only for a time – the way a traveller regards a hotel.”
“There is only one way to happiness and that is to cease worrying about things which are beyond the power or our will. ”

I suppose what I asked myself was simple. "Did I want to use an online service run by someone who had fired so many people, so indiscriminately without care, that disrupted services for so many people and businesses?" And, what's more, who had allowed so many irrational people to be online, amplifying their voices?
At that point, I asked myself, "Why have you waited so long to disconnect, knowing that this person and others have behaved so badly?" The question is one you could ask in relation to many situations. But Twitter...at that point, I gave it no more thought and decided I had no interest in providing the business that is Twitter any more opportunity to benefit from my patronage.

“For a moment, nothing happened. Then, after a second or so, nothing continued to happen.” - Douglas Adams, The Hitchhiker's Guide to the Galaxy 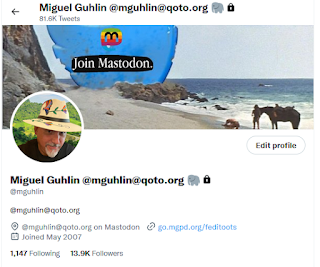 Everything posted on Miguel Guhlin's blogs/wikis are his personal opinion and do not necessarily represent the views of his employer(s) or its clients. Read Full Disclosure
Education Twitter