Cross-posting to #Mastodon from #RSS

"It's just not done," say some on Mastodon, but I can't imagine not cross-posting content. If I had to manually post every piece of content I produce on a daily basis, well, who would have time for anything else?

That's why I was a bit dismayed when I could NOT get the cross-posting tool I've used for the last few months to work. I had to ask for help. What would work?

Cross-Posting Tools: What Do They Do?

You are probably familiar with cross-posting tools like IFTTT.com. There were many more back in the day that were free, but then they all went "pay." Even IFTTT went to a pay version, allowing only 5 recipes or apps, pick your label, to work. I don't want to sound ungrateful. That's great value for FREE. I do wish one of the recipes included RSS to Mastodon. Instead, this is all I could find:

I love to read in the wee hours of the morning, then save content to GetPocket. That content is posted first to GetPocket, then to Twitter, then to other places (e.g. LinkedIn, Mastodon).

The one I usually use, Cross-Poster, stopped working when I switched from hcommons.social instance to qoto.org. I couldn't figure out why. Instead, someone suggested I use MOA.

moa.party has an interesting look, as you can see below, and I've successfully set it up. Of course, I had tried Moa several times already but it didn't work. After taking my time, slowing down, I realized I hadn't been typing my account name properly from qoto.org. I kept typing "qota.org" instead of "qoto.org." Sheesh.Funny, huh? 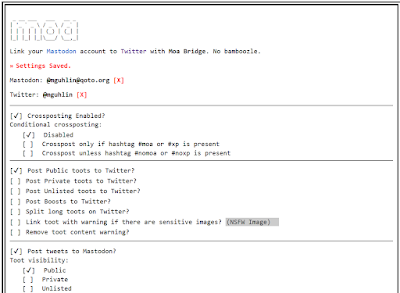 Until Twitter dies altogether, I'll probably continue my cross-posting efforts...I wish there were a service that allowed posting directly to Mastodon from RSS.

Everything posted on Miguel Guhlin's blogs/wikis are his personal opinion and do not necessarily represent the views of his employer(s) or its clients. Read Full Disclosure
Fediverse Mastodon RSS RSSMagic