Making the Move: Shift from Twitter to the Fediverse (Updated 11/7/22)

Looking for a nice space to connect as educators? Or, as is now known as an #EduTooter? Why not join the Fediverse? Think of it as an alternative to Twitter, Facebook, etc. and all that social media stuff. You can't say you haven't been invited, this is your invitation from me. Come along and I'll share some of my experiences.

Focus on who you're connecting with and joining rather than what you're leaving behind. For me, it's 14K Twitter followers, over 500 Facebook folks, and who knows how much else. Everything changes, and the Fediverse may be the place for you to join and connect with others from around the globe.

Connect to Other Educators

Connect with other educators moving to Mastodon from Twitter.

Let's dig in and then see some tips.

What is the Fediverse?

Think of it as a collection of loosely joined (federated) neighborhoods or communities. One idea is a series of floating cities with bridges between them. You join one, but you can access all of them.

There's so much amazing content out there on the Fediverse, it's easy to get lost. Someone described getting an account in the Fediverse as switching between email providers (e.g. Gmail, Yahoo, Outlook, Hotmail).

Another analogy I've heard? The Fediverse is like email (e.g. Gmail, Microsoft, Proton, Tutanota). You can email others even if they have a different email provider.

Here are a few getting started guides, and this isn't an exhaustive list:
There are many resources out there. A google search will get you going.

Look for a Mastodon instance that suits your interests. Really, they are as rich and varied as people. I found the list that Clint shares here a powerful space to start.
You can find me at @mguhlin@hcommons.social (you can try this alternative from the same admin (@Stux) - https://mastodon.coffee). There are many you can find others using this tool

A lot of the fun of sharing from your mobile device comes from using the right app. Here are a few I tried:
My recommendation? MetaText is the way to go on iOS, FediLab on Android.

Here are some suggestions for newbies.

You will also want to learn the vocabulary:

Some purists may not appreciate this tip, but why dump Twitter right away? Instead, leverage both social spaces to build your professional learning network (PLN) so that you can maximize connections. I've run across two tools that allow you to simultaneously post. You post in Twitter (even via IFTTT) and it appears in Mastodon, or post in Mastodon then watch it appear in Twitter.

Here are a few I stumbled across without hardly looking, shared by brilliant folks on Mastodon. I recommend posting to Mastodon first, then letting it spread from there. 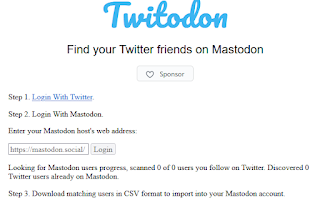 Want to see how many people you know on Twitter are in the Fediverse? Try one of these tools:
These tools let you export a file that you then import into Mastodon via the web browser on a computer; here's what that looks like:
And, you can also find people in the Fedi.directory:

I love this tip that suggests that you can turn your Mastodon posts into an RSS feed, then drop it into IFTTT type service. This allows you to post your Mastodon account posts to anything else (like LinkedIn, blogs, websites, etc.). This is what mine looks like: https://hcommons.social/@mguhlin.rss

Follow people that have similar hashtags to you, no matter where they are. Services like these make it easy to find people by topic:
Want to follow some journalists? Visit https://journa.host/explore 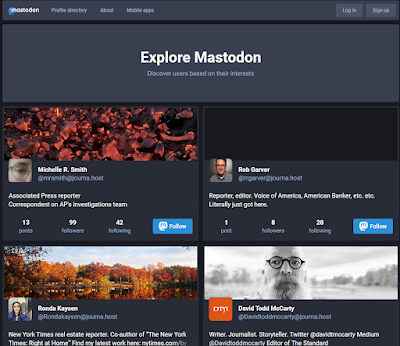 If you wanted to follow Michelle, you see there is a @mrssmith@journo.host under her name. If you hover your pointer over that then copy the link (shown below into your search box), you can follow her. This works with any instance as far as I've seen.
Have fun. I love following folks smarter than me, and there's an abundance of them in the Fediverse (hey, hey, be nice).

7- Create a Group (I did!)
There aren't any "groups" in the Fediverse. You can create and follow a group, though. The hack comes from https://a.gup.pe/

When posting about a subject, just include <at>yourgroupname<at>a.gup.pe
Here's one I created for #EduTooters - @edutooters@a.gup.pe

Cool, huh?
8- Don't Put Up with Harassment of Any Sort
If trolls or bad folks bug you, take these steps:
I've taken the second step a few times and it's worked great.

A part of me rebelled at dedicating time to yet another social media space. I'm already over-extended, why do I want to go there? Well, for the same reason you walk into a F2F conference.
You want to learn something from someone, meet new people, and have fun doing it. I'm already enjoying the conversations in new spaces. Each instance of Mastodon, a connected island in the Fediverse, means an opportunity to discover a rich, authentic culture of people from around the world.
Why not?

Everything posted on Miguel Guhlin's blogs/wikis are his personal opinion and do not necessarily represent the views of his employer(s) or its clients. Read Full Disclosure
Education Fediverse Mastodon RSSMagic Twitter