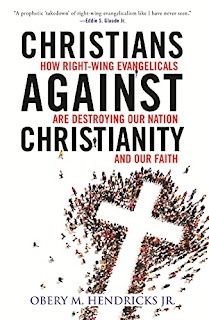 This is a post sure to turn off education/edtech readers. Sorry.
Today, we must realize that schools are under attack by Christian Nationalists that are doing their best to control and destroy democracy in the United States of America. They have launched their attack and democracy can't count on a few well-placed Democrats in the White House to do it all.
It is clear that many Americans have been swayed by the pseudo-religious, pseudo-Christian babble spouted by so-called evangelists. Like the author, I have complained to my wife and others that they are in the spirit of the antichrist. Heresies and blasphemies. It seems the contradictions between the Gospel and what is said to be of the Gospel reveal ignorance or willful deception.
That's why I'm sharing my notes on reading Christians Against Christianity: How Right-Wing Evangelicals Are Destroying Our Nation and Our Faith by Obery Hendricks. Hendricks does a fantastic job refuting from a Christian perspective all the terrible garbage, the "rotten fruit" of right-wing evangelicals pushing Christian nationalism.
As I read his book, I found myself asking myself a few questions:
If you believe in the Adversary working to trick people into turning away from a Supreme Being, then you have stumbled into the dystopian reality that is America, perhaps from as far back as 1619.
It is disappointing stuff. In the last few months, I have often asked myself, would we be better off without the influence of Christian believers? So much so that these words come to mind (well, they came to mind after I saw them in a tweet):

“Religion is regarded by the common people as true, by the wise as false, and by rulers as useful.”

-Attributed to Seneca, but may be a rewrite of the words of Edward Gibbon (1776)(Chapter II: The Internal Prosperity In The Age Of The Antonines.—Part I. Second Paragraph

Well, it doesn't matter who said it or when. It is a bit cynical but accurate, wouldn't you agree?
"God doesn't need our belief to ensure His reign," I've thought of late as I see Republicans scrambling to do just that.

The purpose of separation of church and state is to keep forever from these shores the ceaseless strife that has soaked the soil of Europe in blood for centuries.

This is a powerful book, and here are a few select quotes. You'll want to read the entire text yourself, but these are quotes that were stunning and/or affirmed the problem we're in now. I found Hendricks organization of the text as a powerful way to debunk ideas that have entered popular culture.
I confess the abortion chapter set my own beliefs straight on the matter. My position has shifted from when I was seventeen years old and I was taught abortion was murder.
My daughter put it to me as, "Abortion is a healthcare issue and shouldn't be denied to women." No matter what crazy examples you find (e.g. 10 year old girl being forced to travel from Ohio to Indiana to have an abortion because she was raped but Ohio law prohibits her from having an abortion), a part of me will always see abortion as problematic.
Human life is precious, even unborn. But, it's not my decision to make. If a women must have an abortion, then let that be her decision and God, if He so chooses, may hold her accountable. I'd rather not get involved in that decision. Hendricks makes some powerful points on this topic.
I have only included a few quotes that I wanted to revisit in the future. You will definitely want to read the entire book to better see the case he makes for each topic.

As I read Hendrick's book, I am struck again by these words below:

It was long the case that men would grovel upon the earth,
crushed beneath the weight of Superstition whose head
loomed in the heavens, glaring down with her dreadful visage
until Epicurus of Greece dared to look up and confront her,
taking a stand against the fables and myths of the gods . . .

The simplest explanation? "A disease born of fear and a source of untold misery to the human race." It is a tool to control the masses, to fool them. We have never seen it so plain as we do today, watching Trump, Right-Wing Evangelicals, and Republicans do what they do. All these acts they seek to, and do, perpetrate on human beings is bad enough. But then, they wrap it in the story of Jesus to sanctify it...as if that story were a common fairy tale.
Perhaps it is. Hendricks book makes it plain that right-wing evangelicals story is a false one, rotten fruit, and we would do best to cut the tree down and burn it all.

“Beware of false prophets, who come to you in sheep's clothing but inwardly are ravenous wolves. You will recognize them by their fruits. Are grapes gathered from thornbushes, or figs from thistles? So, every healthy tree bears good fruit, but the diseased tree bears bad fruit. A healthy tree cannot bear bad fruit, nor can a diseased tree bear good fruit. Every tree that does not bear good fruit is cut down and thrown into the fire. (Matthew 7:15-20)

As I reflect on when I first accepted Christ as a young man in the Student Baptist Union (SBU) in Wichita Falls, Texas, just off the campus of Midwestern State University,  I realize that I did so with the hope that good flowed from a supernatural source. The impersonal nature of Catholic Church rituals seemed less certain to believe in than the warmth of the SBU's interactions.

Now, I realize I was really but a boy alone, looking for companionship and friends. In the end, it is in my nature to be alone, to find my own way. For me, God and the Holy Spirit were not to be wielded as sharp swords and axes to decapitate and maim others like LGBTQ+, women seeking abortion, or people being people, making mistakes and sinning.

It is for that reason that when someone says, "God wills it," I know s/he is a liar trying to use God to make money and profit off others' ignorant beliefs and views.

This is a powerful book. Every believer should read it and meditate on it. Non-believers may also find it of interest, an explanation of the fantasies men construct nightmares from.

As for me, I'm firmly in the James Madison camp of separating church and state. The former should never be mixed with the latter.

Everything posted on Miguel Guhlin's blogs/wikis are his personal opinion and do not necessarily represent the views of his employer(s) or its clients. Read Full Disclosure
Book ChristianNationalism MyNotes Politics Religion Review