PseudoScience Defender? I know that I know nothing

- June 10, 2022
Only a few days ago, Tim Holt was taking me to task for pushing pseudo-science. The more I read about science stuff, like the incredibly interesting Johnjoe McFadden book, Life is Simple: How Occam's Razor Set Science Free and Shapes the Universe, I find myself critical of everything. Not "critical" in the way that I get grumpy like a curmudgeon, whining about how lousy things are relative to something else. 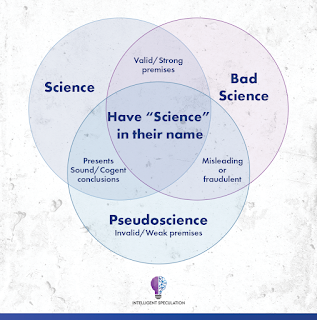 Image Source
No, it's critical in like, "Why do I think that? Where did I get the information to make that assertion?" In truth, I'm reminded of a blog entry I wrote a few weeks ago over at TCEA.org's TechNotes. I am trying to revisit and re-assess the effectiveness of my critical thinking processes. In Part 2 of my blog entry on Adapting Stoic Techniques, I write:

It’s easy to think we’ve mastered critical thinking in a modern age. But it’s a process each person must learn and practice daily. In spite of past efforts, it remains important that educators show their students how to think critically.

“System 1 operates automatically and quickly. It works with little or no effort and no sense of voluntary control”

“System 2 allocates attention to the effortful mental activities that demand it. It includes complex computations” (as cited in source)

One of the reasons blogging is so wonderful? When writing, you experience slow thinking:

We follow a checklist or list of steps that involve adding items to our memory. New information, mixed with long-term memory, finds a place in our minds. We leverage what we know to explain what we don’t fully comprehend. The more we experience, the more sense it makes.

That's why I am trying to internalize Polya's approach, as expressed below, although there are other versions that may be appropriate: I try to capture this in my Evidence-Based Strategies Google Sites, a collection of websites that articulates my understanding of how everything fits together. That is, a magic formula for approaching teaching and learning.

As I've pointed out before, I had my doubts about Hattie's meta-analysis from the moment it was introduced to me in 2018. Over time, after lots and lots of reading, reflecting on my own work as a classroom teacher, I've accepted that Visible Learning is one way of describing things we can't always see or perfectly understand. They are a representation of what we know best, and subject to change. That is, they are NOT the equivalent of scientific gospel, good news that is sacred and untouchable.
If anything, just the opposite. Mundane and intended to be manhandled, have hands laid on it, tried to be broken, shown to be false or true as facts appear.

“To believe Hattie is to have a blind spot in one’s critical thinking when assessing scientific rigour. To promote his work is to unfortunately fall into the promotion of pseudoscience.”  Pierre-Jérôme Bergeron as cited in The Cult of Hattie

At a workshop, a participant walked up to me afterwards to point out that my session on Evidence-Based Strategies (EBS, not IBS as I joked to smiles from the audience) re-affirmed her efforts in her school district.
"No one could define what evidence-based meant, nor explain how what we were doing was evidence-based," she reported. She had begun asking questions after doing research for her Master's thesis. She found the lack of understanding about what evidence-based strategies, teaching to be quite disturbing.

Evidence-based education (EBE) is the principle that education practices should be based on the best available scientific evidence, rather than tradition, personal judgement, or other influences. Source: Wikipedia.

That's the real trouble isn't it? As human beings, it's so easy to allow that the heavens are fixed in place, that the Earth is the center of all...or that what we believe is. Education practices are often about what we know, our personal judgement, than scientific evidence:

Just because an explanation springs easily to mind and does require much thinking about doesn’t mean it’s either simple or sensible. We run into this kind of intuitive thinking in education all the time. Teachers are often guilty of assuming an intervention is effective because they see students getting on with stuff and apparently enjoying it.

Does this mean their intervention will be effective in the long term? It’s easy to say yes of course it will, but how do we know?

After all, students producing work and being engaged are poor proxies for learning. Source: David Didau

That first paragraph describes the embrace of ed-tech in spite of no scientific evidence to show it works. You have to start with evidence-based practices, then extrapolate, and realize that you are really doing your best with nothing. I am tempted to proclaim with complete confidence, like that philosopher fellow did some time ago, "I know that I know nothing."

After listening to Hattie speak several times, read more than a few books, I'm not convinced Hattie is a pseudoscience practitioner. At worst, bad science. He's doing the best with what he has. If you agree that there's a hole in Hattie's critical thinking, then find a simpler explanation for what works with teaching and learning.
That's why I find myself gravitating to Mike Bell's work in The Fundamentals of Teaching. He isn't dependent on strategies that Hattie highlights or assigns a high effect size.
The goal remains the same for both...finding what works best. The more people know about these ideas, the more can focus to find and use better solutions.

"Educational research will never tell teachers what to do; their classrooms are too complex for this ever to be possible. " -Dylan Wiliam, as cited

Everything posted on Miguel Guhlin's blogs/wikis are his personal opinion and do not necessarily represent the views of his employer(s) or its clients. Read Full Disclosure
Education Hattie Research