Update on Choosing an LMS @BryanAlexander 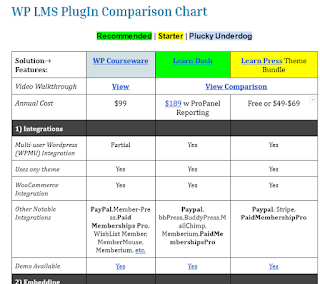 Earlier this week, I saw a tweet from Bryan Alexander about helping a buddy choose an LMS. This was quite fortuitous because I spent a big portion of my day researching LMSs, as well as reflecting on my own experiences.

And, that's what prompted me to write the blog entry, Choosing a Learning Management System. It also got me looking at different Wordpress LMS PlugIns as a simpler alternative to the Moodle "everything but the kitchen sink" LMS solution.

With that in mind, and at a colleague's behest, I put this chart together. Not every solution I looked at, considered, and discarded appears on this list. I am grateful to Jason Neiffer for pointing out LearnDash.com, which has some nice features! But back to Bryan Alexander's tweet. He shared: 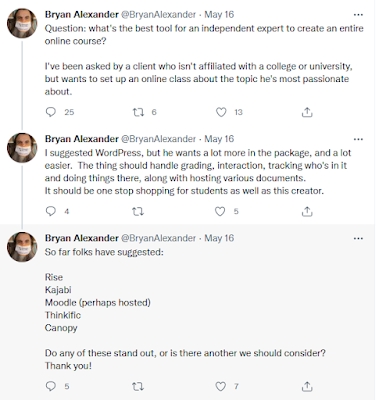 All that, I also put together a chart. It may be wrong, but that's the point of sharing something. I seek correction, just be kind. It's in a "anyone can edit" Google Doc. Feel free to update and improve it (as opposed to update it and destroy it).

This was an aside comment but it got so long, I decided to tack it on to the end of this blog entry.

Aside: In case you missed it, I administered 12-13 instances of Moodle for a 56K student, urban school district in Texas. I've also administered two WordPress instances and got into phpMyAdmin to mess around with MySQL innards. Yeah, I did Moodle stuff via the command line remotely on a $16K server in my district...not sure how I got them to buy it, but hey, 13 instances is powerful amount of service. I also had bash scripts to make backups, run CRON jobs, etc. I was in my 30s, and energy was a boundless well to draw upon. <grin>

Then, Moodle 1.9 was upgraded to Moodle 2.0, I switched to a job with more responsibility, and my expertise went to heck. I switched to being a Director of Technology with less time on my hands, and lost a bit of my technical prowess. It got so bad, I ended up calling on an old friend to bail out a business client.  I was totally embarrassed and felt horrible. I've never told this story before, but abject humiliation will do that to you.

I did not respond well to my failure, but I had a new job in a different space that demanded my complete attention. Success in a new line of work is one effective salve for failure.

Before that salve took full effect, I made a firm decision to not be a Moodle Admin for hire any longer. Then, roll forward to now, Moodle has evolved, I have access to technical support, and I'm pondering what LMS is the right one to use for the myriad online courses I support. Really, the right one to switch to, moving away from a proprietary LMS.

Everything posted on Miguel Guhlin's blogs/wikis are his personal opinion and do not necessarily represent the views of his employer(s) or its clients. Read Full Disclosure
Education LMS Moodle Wordpress WordpressMU

Bryan Alexander said…
Miguel, thank you for following up with so much work. I like the Google Doc chart very much.

And thanks, too, for the last part of this post where you share with us some of your professional arc. I admire the honesty - and drawing on colleagues is one of the reasons we have them.
June 4, 2022 at 3:24 PM