If a man is offered a fact which goes against his instincts, he will scrutinize it closely, and unless the evidence is overwhelming, he will refuse to believe it.

If, on the other hand, he is offered something which affords a reason for acting in accordance with his instincts, he will accept it even on the slenderest evidence. The origin of myths is explained in this way.
BERTRAND RUSSELL, Proposed Roads to Freedom

Over the last few mornings on my way to work, I've been listening to The 1619 Project. Earlier, I have written that I can't listen to nonfiction on long car trips. The audio puts me to sleep. It's clear that I will need to re-assess that statement. The 1619 Project is anything but sleepy. As I listened, I found myself moved to tears at the horrors endured by the enslaved, especially the enslaved women.
There's nothing I can point out at this time, or quote, that I would want to share. But in my Twitter feed, the following image popped up, and it is an apt representation of the truth: 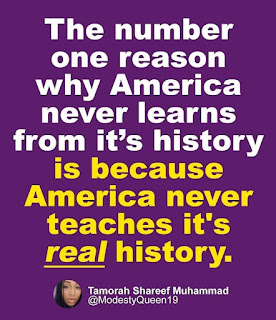 Having grown up learning "fiction" as history in Texas schools, private schools no less, I find the truth about what happened to be shocking and eye-opening. Real history destroys the concept that critical race theory is about simply making white people feel bad, or building a case for financial reparation.
There is no reparation possible. No amount of money you could give...and it's not about making people feel bad. What is required is that people bear witness to the true historical testimonies, the recorded facts, the oppressive policies that arose from enslaving others for political gain and profit now enshrined in every aspect of how we do everything. It is heartbreaking to learn some of the horrors endured, suffered, inflicted upon the enslaved. That said, there is much that can be taught to high school students of what happened...and would energize efforts to not live and work within a system based on, built on the foundation, and with the bones and blood of the enslaved.
From schooling to medicine to law, all of it is tainted, and until we all know the real history, there's no easing the suffering of the enslaved Black folx, the murdered Indigenous people, and those who helped them. Perhaps, there's no easing of the enslavers' guilt, either.
I may go back to fiction after this. Listening to someone argue against teaching this history, I was reminded of John 3:11, an excerpt appears below:

“So you are a teacher of Israel,” said Jesus, “and you do not recognize such things? I assure you that we are talking about something we really know and we are witnessing to something we have actually observed, yet men like you will not accept our evidence. Yet if I have spoken to you about things which happen on this earth and you will not believe me, what chance is there that you will believe me if I tell you about what happens in Heaven?

All of us, who turn away from what actually happened, who fail to correct the longstanding effects, are subject to judgment.

"This is the judgment—that light has entered the world and men have preferred darkness to light because their deeds are evil. Anybody who does wrong hates the light and keeps away from it, for fear his deeds may be exposed. But anybody who is living by the truth will come to the light to make it plain that all he has done has been done through God.”

But whether you believe in the words from the Bible, or not, enslavement happened and its effects endure today, enshrined in our institutions. We must do something about them, or become complicit.
Complicit
This idea isn't new, only new to me. After all, consider the following:

To be indifferent to or ignore human trafficking and modern-day slavery would be to become an accomplice to those crimes, Pope Francis said.
"Although we try to ignore it, slavery is not something from other times," he said in a video explaining his prayer intention for the month of February.
"We cannot ignore the fact that there is as much slavery in the world today as there was before, or perhaps more," he said in the one-minute video, published online at www.thepopevideo.org Feb. 7.
"Faced with this tragic reality, no one can wash their hands of it without being, in some way, an accomplice to this crime against humanity," he said, calling for prayers and action by welcoming those who are victims of human trafficking, forced prostitution and violence. (Source: NCR Online)

We consume the products of slavery every day. All of us. Today's globalized supply chains make it is almost impossible to avoid goods or services free of the fingerprints of slavery. Electronic gadgets, clothing, fish, cocoa and cane sugar are the products mostly likely to be tainted. (Source: Newsweek)

Everything posted on Miguel Guhlin's blogs/wikis are his personal opinion and do not necessarily represent the views of his employer(s) or its clients. Read Full Disclosure
American History CRT Education Politics TrueHistory