- September 05, 2021
Ok, this blog entry is the first in a series exploring Greg Epstein's book, Good Without God. Before that, though, I thought I'd share how I came to be reading a book about Humanism.

Living through COVID-19 pandemic, it's been curious to see the assault on reason that many "faithful" have launched. It may be that these believers are NOT believers, or that scientific reasoning and faith are not mutually exclusive (as those who fight against masking, vaccinations exemplify). After all, I believe and vaccinate/mask up. There are other questions, though. I ran across them in Phil Zuckerman's article in Salon, and they were intriguing:

. . .while most people assume that such a morality is grounded in religious faith, and while it is certainly true that all religions contain plenty of moral ideals, in our nation today, it is actually the most secular among us who are exhibiting a greater moral orientation — in the face of deadly threats — than the most devout among us, who are exhibiting the least.
Before proceeding, let me make it clear: When I say the "most secular among us," I mean atheists, agnostics, people who never attend religious services, don't think the Bible is the word of God, and don't pray. (Source: Phil Zuckerman, Salon)

The rest of the article shares some interesting stats:
The author continues with a laundry list of hot topics, asserting that for each, the "most secular" have a moral stance as opposed to religious. It all, of course, raises the question, "Can people be good without having some Divine Being checking their evil?"

For many people, including many atheists, the answer to Dostoevsky’s18 question “Without God … It means everything is permitted now, one can do anything?” is “Yes”, inasmuch as ‘every-thing’ refers to acts of extreme immorality.

Hmm. Is being moral limited to believers? It's obvious that the answer is, "No. Unbelievers can be moral." You may as well ask, "Can believers engage in scientific reasoning?" Looking for some clarification, I found myself curious by Greg Epstein's selection as Harvard's chaplain. The guy must be a genius, no?

When I saw that Harvard had selected an atheist for its chaplain, I was intrigued. I mean, my idea of a chaplain is a priest or reverend or rabbi. Instead, Greg Epstein, author of Good without God, was the man chosen for the job. The book's inside flap says: 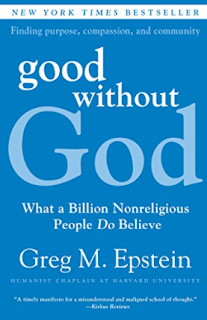 Questions about the role of God and religion in today's world have never been more relevant or felt more powerfully. Many of us are searching for a place where we can find not only facts and scientific reason but also hope and moral courage. For some, answers are found in the divine. For others, including the New Atheists, religion is an enemy.
But in Good Without God, Greg Epstein presents another, more balanced and inclusive response: Humanism. He highlights humanity's potential for goodness and the ways in which Humanists lead lives of purpose and compassion. Humanism can offer the sense of community we want and often need in good times and bad--and it teaches us that we can lead good and moral lives without the supernatural, without higher powers . . . without God.

Humanists don’t deny the significance of God, but rather consider God to be the most influential literary character ever created.

Given recent reflections, I decided to pick up a copy and have found it a fascinating read.

Here are my notes on Greg Epstein's book, Good Without God. Those notes capture key ideas that I simply had to organize to process well.
Chapter Three addresses itself to the question, Why Be Good Without a God? Purpose and The Plague. I can't wait to read this, given COVID-19 pandemic.
:-)
Everything posted on Miguel Guhlin's blogs/wikis are his personal opinion and do not necessarily represent the views of his employer(s) or its clients. Read Full Disclosure
Book Humanism Journeys MyNotes Religion Review TrueHistory