October 05, 2020
One of the consequences of hating to do your own lawn work? Unsolicited requests to provide assistance from lawn care professionals. During a time when I was traveling for work, my wife had to handle lawn care arrangements. The lawn care guy was from Mexico and preferred to speak Spanish. However, we both occasionally would lapse into English while explaining what work needed doing. 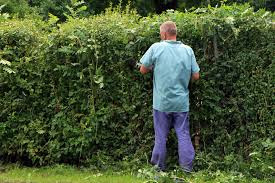 An Unfortunate Choice of Words?

"Can I come trim your bush?" My wife showed me the brief SMS/Text message she had received on her phone. When we saw who sent it, we both laughed until we had to sit down. The yard guy had been wanting to cut the front hedge. We had to smile at his attempt to poorly worded up-sell his lawn-mowing services. English was his second language, and it's possible his attempt to solicit business had been poorly worded.
In this case, our problem was how to characterize the word "hedge." My Spanish language experience did not include lawns, nor do I remember learning a word for that at any time in my life. And, when you're standing on the front lawn discussing lawn care, the last thing you want to do is say, "Un momento, tengo que buscar como decir esta palabra en español." (The word for hedge is "arbustos.")

Over the last few months, I've given some serious thought to trimming away the Twitter hedge that blocks my visibility. There's so much out there that obstructs the areas I am focused on. That focus is on education, education research, and applying research to K-Adult teaching and learning. I must confess that I have no small interest in other areas that involve advocacy on behalf of certain groups (e.g. immunocompromised educators forced to go back into COVID-19 unsafe areas, people of color, and anyone discriminated against). As you might imagine, during an election year, it's incredibly difficult to focus on anything. There's simply too much noise.

Now, let me define "noise" per the technical specification. Here's the relevant definition:

irregular fluctuations that accompany a transmitted electrical signal but are not part of it and tend to obscure it.

The problem with reading content, even stuff I agree with, is that it detracts from what I'm trying to focus in on--education. It's been a journey to arrive at this understanding of what I want. And, it's taken forever to figure out what the "irregular fluctuations" are that detract from the "transmitted signal" that I'm hoping to learn from. The transmitted signal I'm listening for is education, education research, bilingual education, and some edtech. That last piece was really tough to arrive at. I realized that I had overwhelmed the Twitter feed of people I follow with too many voices saying the same thing.
With that "Aha!" moment, I realized I needed to unfollow people, even if they chose to follow me. If my goal was to be able to dip into the Twitter flow and learn something new, then I need to stop having a lot of duplication in messaging. I needed to dump Trump supporters, Trump detractors (I identify with this group), and anything else irrelevant to the "transmitted signal." As I started trimming Twitter, I realized I was uncovering people who didn't retweet everyone else's stuff so much.

Each time I snip a branch off, unfollow someone, I see something else. I see someone who tweeted less but said something I valued. That doesn't mean the person I unfollowed didn't say anything of value only that it may have been a duplicate of several others. As I started to cut away the duplicates, the irrelevant (e.g. sports, businesses about stuff I wasn't interested in),  I noticed that those I follow on Twitter fall into several categories:
So, then I asked myself, why not just follow Group 1 and Group 3? After months of whittling, I've managed to drop to about 2,000 people that I follow. And, some of them don't need to be followed. I'm amazed at the people or businesses that I followed at one time. They don't tweet about stuff I'm interested in...but I never heard them because they were obscured, buried in a million tweets from others.
We'll see how this works. I know that trying to follow the 13.8K people that follow me wasn't working. The real takeaway is that, even if everyone was in Group 1 and Group 3, I would still be unable to process a fraction of the interactions. So, with that in mind, I have to trim the Twitter hedge.
Everything posted on Miguel Guhlin's blogs/wikis are his personal opinion and do not necessarily represent the views of his employer(s) or its clients. Read Full Disclosure
Social Media Twitter TwitterEduStream