December 31, 2019
With some time off this holiday, I found myself with a powerful craving for native Panamanian dishes. Although I love all the great food in San Antonio, Alice Keeler's trip pictures of her visit to Panama City (Rep. of Panama) had me longing for old tastes.

As a native Panamanian, I occasionally find myself longing for the tastes, sounds of my first homeland during the holidays. This Fall, I even made a Wakelet collection of how to make hand pies (a.k.a. empanadas).

As the only Panamanian in my family in Texas, I realized that if I wanted to capture that taste, I would have to make it myself.

While making empanadas (read The Glory of Empanadas) are a bit out of my reach at the moment, I found myself wishing for some yuca. Can you believe that the last time I ate yuca (a.k.a. "cassava") was when I was about 5 years old? The taste was so distinctive, it has stayed with me for many years. As a result, I started to look for places nearby in San Antonio that served it, but given the holiday hours, it wasn't so easy.  Llalla's Food Truck certainly will be my next stop...and when I saw their yuca fries, I found myself longing for this old childhood taste.

Here are the steps I followed to make the yuca fries...The Healthy Maven had a recipe, so I decided to follow it.

I headed to our local HEB and picked up two yuca roots. When I got them home, I set the oven to 450 degrees and put a large pot of water to boil.

The first task was to strip the protective layer off the roots. I had no idea this would be the hardest part of the whole job. Peeling the yuca roots was accomplished with a sharp knife and I feared I might cut off a finger. Fortunately, everything went smooth. As I worked at the job, I remembered how I'd seen my countrymen do the job...with a machete on a wood cutting board outside. This made a lot of sense since the yuca's outer layer is tough.
After getting the roots peeled, I went ahead and put them in water. Then, I re-read the recipe, and realized I'd missed a step. 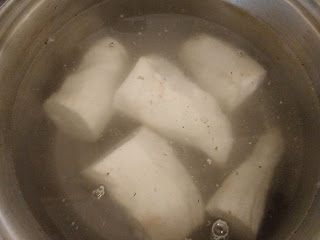 After realizing they needed to be sliced into "fries," I sliced them into rough rectangles resembling a "fries cut." I'm not sure how close I got to that since the yuca doesn't cut as easily as a potato. I pulled them out of the water, then sliced them, and put them back in. I put a pinch of salt in as well. In a short time, I brought the water to a boil...apparently, being soaked in water gets rid of the cyanide. Who knew? 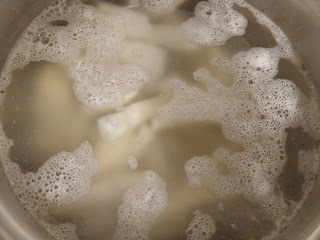 After boiling the yuca for 10 minutes, I went ahead and pulled them out. Ready for the next step!

Step 3: Put in a Bowl and Mix in Olive Oil, Seasoning and Pepper

Next step involved putting the boiled yuca into a bowl. I have to admit that the yuca smelled delicious at this point, and I was tempted to eat it (hey, I was hungry). I can easily imagine stopping at this point and dropping a chunk of yuca onto a plate for eating.

Resisting temptation, I mixed in some olive oil, steak seasoning powder (er, recipe called for chili powder but I didn't have any) and black pepper. Then, I put them into the oven (450 degrees) for 15 minutes. After 15 minutes, I pulled them out, flipped them, and put them back in for another 15 minutes.

Total time to get to this step? It felt like forever, but I started watching Point Break when I started and finished the movie to yuca fries. I guess that was at least 1.5 to 2 hours total. What really slowed it down was peeling the yuca roots. Perhaps, next time I will use a machete

How did it all turn out? They came out looking like this...my second pan had some smaller chunks that got fried in olive oil, and they were fantastic, delicious and crispy. Eating the thicker chunks was definitely filling. I ate a total of five, and was filled up. This makes them a lot more filling than regular chunky fries. The thickness made them such a great snack. 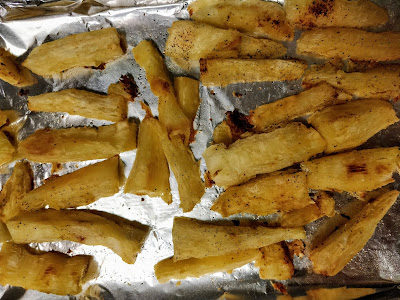 They tasted great as is, or dipped in ketchup. The texture was exactly what I remembered from my childhood, and I have plenty of leftovers for the next few days.