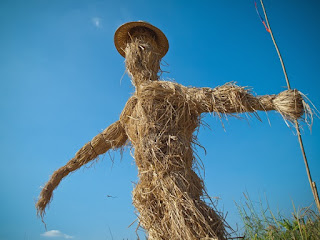 How do you decide if one opportunity is more valuable than another? When I was in my mid thirties, I had three job offers pop up. I had applied and interviewed for three jobs in the space of a week. The jobs?

Each of the positions tempted me. In the end, I went for the large urban school district. How did I narrow down the options? Simply, I made a list of what I valued most at the time. I took a hard look at my family's needs, my ego (sorry, is it wrong to admit that?), salary requirements, etc.

When I've looked back at the decision point, I wonder if I might have made a different decision. But when I do that, I realize that my priorities have changed. As such, what I want now is different than what I wanted then. And, I have to affirm my younger self for choosing as I did.

But is that the best way to choose between available opportunities? How do you make a decision now, knowing it will affect your for the long-run, even as you deal with short-term demands?

The Value of Opportunity

Carl Hooker writes about What Opportunities are Lost When You Ban Technology. In that piece he shares a powerful story about his daughter and her response to a situation that involves digital citizenship. In his version, exposure to technology and its proper usage in school influences his daughter to make a decision she and he can both be proud of.

Now, in the case of the above example, I believe my daughter’s “instinct” was actually implanted in her at a young age. Starting with her use of a device in kindergarten both at home and at school, she’s received hundreds of hours of discussion around appropriate use and digital etiquette. What would happen if I never let her near or around technology? Would these discussions still have meaning or relevance?

Here's my response to that question:

Yes, your daughter would have had the opportunity to develop an awareness, an internal sense of right and wrong. She would have developed this in school, but also in conversations at home, at Sunday school. Banning technology would have made little difference.

The key question wasn't whether the student recording girls dancing poolside was using technology or not. A different question was, "Is the intent of that person recording me improper in any way? To humiliate or cheapen me?" I suggest that the answer is that recording a girl poolside, posting it online isn't a question of YES or NO. Rather, it's a question of what was the intent?

In our lives, we are going to encounter a multitude of situations. Being bullied, demeaned, picked on requires situational awareness, a sense of not only the bad or ignorant intent of another. It is a question of how will this appear to other reasonable people. Was being filmed while clad in a bathing suit poolside a bad thing? Many girls and young women on Instagram will say, "No it is not" because they have a purpose in being so recorded.

But other young women will have a response (not unlike Carl's daughter) because they have an awareness that such behavior is not in line with their values, and that it could taint the perspective of others who may view the videos with less than positive intent.

This example that Carl has posted only incidentally includes technology. The "Think Before You Post" phenomenon is an appeal to the fear that our children cannot make reasoned decisions, that they must be protected from an evil world.

In the rest of his blog entry, Carl makes some arguments as to why children should go to schools where technology is banned or absent. I point out my initial reaction to the tweet that started this conversation and invite you to read it: Banning Technology: A Rebuttal of a False Savior.  I attempt to clarify what exactly I am referring to when I say "technology" and/or "edtech."

Straw Man Argument #1 - Get on the Bandwagon

In this argument, Carl pushes back against banning tech. He says we shouldn't follow in the footsteps of Silicon Valley CTOs. Unfortunately, he misses the point. I agree we should avoid hopping on bandwagons like Silicon Valley people he refers to.

What I disagree with is the idea that this is a valid reason to NOT ban technology. If you read the research, it's clear that edtech is one of many innovations in schools that distract students from reading, writing, engaging in computational thinking.  If you are trying to focus on effective instructional strategies that work, there comes a time when you must STOP DOING the stuff that doesn't work as well or not at all.

Into the "doesn't work as well" bucket, technology fits. So, this has little to do with Silicon Valley. It has more to do with what works according to research and trimming or cutting out the rest that does not.

When I saw this one, I almost laughed. I have written about "avoiding hormone addiction." You can read an excerpt below:

Did you know your brain releases dopamine as you jump from tab to tab? The more tabs, the more the “feel-good” hormone shows up. Who knew you could get a kick from open browser tabs? Opening tabs, jumping from one to another, gives you a pleasurable feeling. You aren’t being productive, but you might feel as good as if you were. You’re a dopamine demon, a feel-good fanatic, a tab troll.
Want to take the first step and avoid dopamine addiction? Use a tab manager

Really, Carl? This isn't a reason for banning technology and it stinks as a reason to use for allowing technology in schools. Aren't there better, more research-based answers?

"We have no right to teach in a way that leads to students gaining less than d=.40 within a year." - John Hattie, Visible Learning

"I shared that in classrooms where I see technology being used best and with the most purpose are classrooms that are largely project-based. In these highly engaging classrooms, students are using their devices to collaborate and solve real-world problems," says Carl Hooker.

Forgive my skepticism. In spite of the massive efforts to put technology in schools, there are few opportunities to see technology being used best and with purpose. Worse, approaches like project-based learning (PBL) lack research to support their use in K-12 education. Before we spend ANY MORE MONEY, and PRECIOUS TIME, we must ask a simple question:

Can we get the job done with less expensive tools with proven to be effective strategies?

If the answer is "Yes," then technology is a distraction, a waste of funding, and every moment we spend trying to figure out how to use in schools detracts from learning. Again, don't take my word for it. In school's today, research shows that our children are NOT learning BECAUSE of how technology is used in schools.

The above excuses are rooted in some form of fact skewed with bias towards what ultimately amounts to the “easy button” decision of banning technology. Eliminating one variable in certain environments doesn’t fix the problem. Source: Carl Hooker

Banning technology is not the easy button. What is?

The EASY button makes it allowing an influx of ever-changing technologies, devices, apps and software, as well as web-based services into classrooms.

Each represents a distraction, an ineffective use of time, money and effort at a time when teaching could be so much simpler, easier. Of course those who support edtech will oppose pushing the EASY button. Why might that be?

Let's focus on what DOES work in schools. Let's stop graduating kids who can't read, compute, or think. Let's stop addicting children to sloppy thinking, and specious reasoning. Instead, let's focus on:
The EASY button is to focus on what works, stop doing what does not. Does this mean technology is never used? Of course not.

Pull your head out of the sand. Toss those excuses for edtech into the trash. Embrace effective instructional strategies. Prepare students for a future full of  amazing challenges, and give adults hope. Hope that their children will meet a digital future with the skills to read, write and think in a critical manner.