Do you know the story of the Roman god, Saturn? Each time his wife had a child, Saturn would eat it. Why? It's quite curious and makes me think of the current administration and those who support the end of tuition waivers and rip funding from public schools. 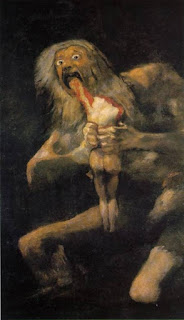 Saturn Devouring His Son is the name given to a painting by Spanish artist Francisco Goya. According to the traditional interpretation, it depicts the Greek myth of the Titan Cronus (in the title Romanized to Saturn), who, fearing that he would be overthrown by one of his children,[1] ate each one upon their birth. (Source)

In a move sure to ruin lives, the proposed federal tax code threatens to tax the learned poor (you know, those students who have given all to earn doctorates, working long hours and serving as teaching assistants) and the learned middle class (e.g. teachers).

Do you know about tuition waivers?  They make advanced degrees possible in many areas, including coveted STEM fields that our country needs.


Approximately 145,000 graduate students could be affected by this change, about 60 percent of them from STEM (science, technology, engineering, and math) fields, according a 2011 to 2012 survey by the Department of Education, the most recent data available. Source: Vox.com in study linked below in the facts section


Cutting tuition waives to give that money to corporations makes about as much sense as proposals to strip miners of safety protections.


What are the facts?

The proposed bill "eliminates or consolidates tax credits used by both graduate and undergraduate students...those pursuing master’s degrees and PhDs will get hit the hardest by the proposed changes" (Source).

Why Is This Bad?

If a student is making $30K as a teaching assistant and doing other jobs, receiving a $20K tuition waiver, s/he could be taxed for $50K of income. Now imagine students who actually have an income of $30K (which is below poverty level), they are now in the unfortunate position of having to pay taxes on funding they have earned via a fellowship.

Here's another way it's been described:


On top of being taxed on the $30,000 a student earns in the lab, he’ll have to pay taxes on between approximately $20,000 and $30,000 in tuition that the school is covering — effectively taxing an individual on a total of $50,000 to $60,000 annually. For example, that might push an unmarried PhD student who receives a $30,000 stipend and gets $30,000 tuition waiver from the 12 percent tax rate for lowest earners up to the 25 percent tax bracket —even after the increased standard deduction ...

I don't know about you, but penalizing students who are working hard to earn advanced degrees is plain wrong. But giving that money to corporations so they can generate more low-wage, low skill jobs, that's not just wrong...that's disempowering and evil.


I want [my grandchildren] living without the aid of government assistance but knowing it is there. I'd like them to get an education at a price that doesn't wind up being like a mortgage without the house at age 22.

Source: Doug Johnson in his Blue Skunk Blog [spelling errors corrected in this quote, 'cause, well, Doug is getting older

Contact your representative(s) and let them know what you think.

What are the facts?

According to EDWeek magazine, the proposed bill seeks to repeal the "$250 tax deduction teachers and principals can take for spending their own money on classroom supplies." Find out more about how underpaid teachers are getting backstabbed by the tax bill.

Why is This Bad?

This is bad for a simple reason. Public schools are already underfunded. Teachers try to make up the difference paying for classroom supplies. I can report firsthand that as a teacher, I spent much more than $250 throughout the year. My spouse, a 2nd grade teacher in an urban school district, spends much more. That doesn't include all the snacks and rewards she provides for children who go home, having eaten their only meals at school.

Contact your representative(s) and let them know what you think.