November 18, 2017
While I don't care to delve into politics here at Around the Corner, I am forced to remark at the steps politicians take to protect their financial interests and hurt students and/or educators. This past Thursday, the GOP tax code changes were approved. While you can read about what it means for Americans like you and me, it has profound, negative effects for students in graduate studies.

My daughter and son-in-law are involved in graduate level studies. So, this definitely hits home. As a result of this tax code change, my daughter may not be able to earn her doctorate and contribute in a way that makes America better.

Here's a graphic that captures the unprecedented attack on graduate students in American universities: 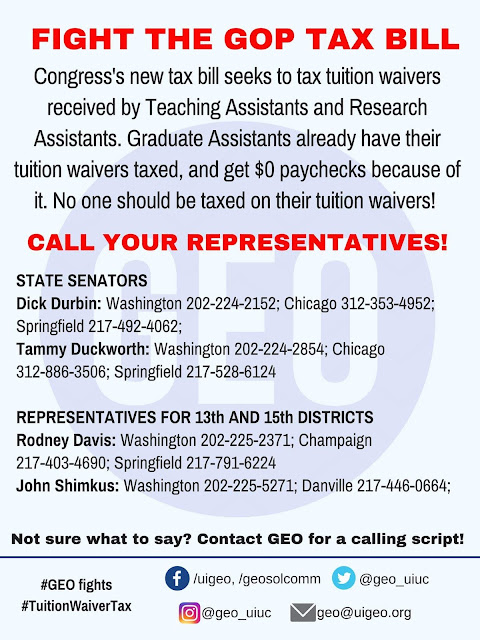 And here's a write-up about it:


Say goodbye to most tax benefits for college. At the moment, low and middle income Americans can deduct up to $2,500 a year in student loan interest. That benefit would go away in 2018. In addition, grad students who get tuition waivers because they teach or do research would now have to pay income tax on the waiver, a big change. For students currently in school, the American Opportunity Tax Credit would remain, which allows a $2,000 credit for higher education expenses.

FINAL RANT
Now, I don't put much stock in red/blue state garbage. Politicians are uniformly disappointing, and I seldom place my hopes in them. I hold to beliefs and behaviors that represent both Republican and Democratic platforms. But I want to invite my fellow Americans to join me in kicking out the current presidential administration as a collection of know-nothing, self-important poopy heads who are hurting students and educators. Let's elect people who will do no harm to children and educators rather than lie,harass,under-fund and tear them down any chance they get.

And, since I'm ranting political, allow me to say one more thing: In no workplace I have ever served is sexual harassment allowable. Why do we allow it in our Nation's Capital? Why do we allow it from the people who can, with a wave of the pen, destroy the livelihoods of everyday Americans, especially those most precious, our children?

Here's a warning to all politicians in office: I am voting you out.