November 18, 2017
Awhile back, I had the chance to facilitate a technology leadership summit at TCEA. This resulted in a brace of blog entries I wrote for TCEA. You can read the first one online at TCEA's TechNotes blog: 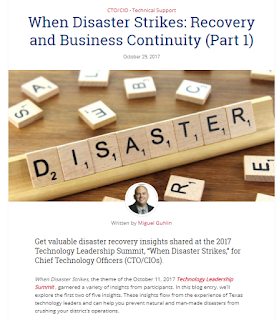 Some of my key takeaways involved emphasizing the importance of the points below. I've tried to illustrate them with points taken from my own experience as Director of Technology for a San Antonio school district. I honestly felt like the Hooper in the old Burt Reynolds movie.


At the time I was writing this blog entry for TCEA, I had the chance to have a few more conversations with folks. One of them was with Edward Doan from Google.

I'll have to link the second part (which contains the lion's share of insights) later.