- August 15, 2016
Last week, the moment came and went. It wasn't much of a moment, but I was still shocked to see it happen. Having blogged over 12k entries just here at Around the Corner alone (both via Thingamablog tool and Blogger, which is what I use now), as well as extending my PLN to those happy folks who read the award-winning TCEA TechNotes blog that has been kind enough to publish over 67 blog entries since I joined them on March 21, 2016, I shouldn't be surprised at my Twitter moment. How that moment came about is a bit of an irony, though, and worth taking a moment to reflect on. 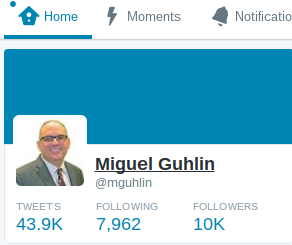 When I started Around the Corner, as well as jumped into the Twitterverse (May, 2007), I imagined that blogging was a publishing venue, another space to be filled and interacted with. To that end, I started republishing all my old stuff that had been locked up in print magazines--some of which are gone now, so that's a good thing I saved those entries.

My personal goal is to write 100 blog entries at TCEA for publication before my six month anniversary, which falls on September 21st. Frankly, I am amazed at the wealth of content I have. I finally have more content than I can write about given the time available. What a wonderful problem to solve as a blogger! And, of course, everything that I publish is auto-shared via Google +, Twitter, and Facebook.

When I expanded to 10K followers on Twitter, 4.6 million blog views, last week, I was shocked. It's not that big of a deal when you consider others...but I'm just astonished for myself. The truth was, I hadn't been writing anything new since I hadn't been learning with the same gusto. My work as a technology director was more focused on things that are difficult to blog about without serious retrospection. You can't write about some dumb thing an employee or pair of employees has done (hmm, maybe I can, but who wants to?).

Transitioning to my current position has been a sheer joy, an embrace of daily learning. In fact, I remarked to a colleague, "All those things I passed on and encourage others to learn so they could share it with others, I've been learning and exploring!" That's the price of happiness for someone who lives their life as if it were but fodder for their blog. :-)

While oftentimes frustrating (learning new stuff can be exhausting, even while being exciting in a good way), learning new things daily reminds me of how important constant learning is. There doesn't seem to be a time when I'm not learning something with the intention of sharing it with others, often scrambling at the edge, barely ahead of the folks I get to share new ideas and approaches with. But unlike when I first started blogging, I no longer need to be an expert. The pressure is off. Now, it's ok if I don't know and share that. It always was, but I feel it at a different level...dare I say, in a humbling way?

One of my favorite stories was authored by David Gemmel. If you haven't read his stuff, you should check it out. In it, Waylander is working with his daughter on something incredibly important, but also mundane. I don't remember the exact words, but it's the idea that you're doing something incredibly important but not being distracted by the IMPORTANCE of it. Instead, you are grounded in the act itself, a common, ordinary movement. And, because of that grounding, you are able to do whatever it is in a way that is transformational.

Wait, I didn't capture it the right way. Oh well.