- October 21, 2015
Have you asked your supervisor, "What am I not doing that will get me fired because I missed it?" Put another way, what should you do to ensure you keep the stakeholders happy?
One of the fun questions I've run across in my readings about Chief Technology Officers (CTOs) includes one I hadn't ever anticipated:

“Think it through by analogy. The CFO is not responsible for making revenue every quarter, but if there is a big surprise, fire him.

The CTO is not responsible for delivering products every quarter, but if you miss the internet or a similar technical inflection point, fire him.”

Indeed, I have often thought that asking what you should get fired for in a job is a great way to clarify your thinking about what is really important. Sometimes we spend a lot of time working on the wrong problems.

The greatest leverage is when the project is in its earliest phases, when we are deciding on architectures in the context of market requirements and when technology choices are being made. This is where you should see the CTO. Once there is a large marching army of engineers heading off in some direction, it is pretty difficult and expensive to make changes. Much better to get things sorted out early. It is what I call, “Get ‘em while they’re young.”

Stuff to Get Fired About

Time for a change...what is your keep my job safe list?


Special thanks to TexasISD.com for featuring this blog entry on their web site! 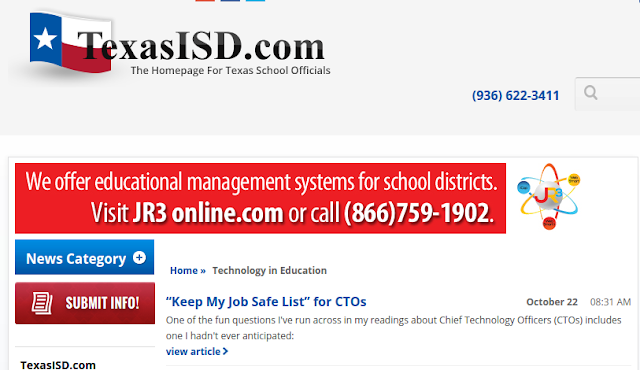