Seeking Grace in Schools: Beneath the Judge's Gaze

July 13, 2015
One of my favorite expressions, "He was taken up to heaven right away; he was in a state of grace." If we thought of school systems as people on their death beds, how many would be "taken up to heaven in a state of grace?" Sometimes, I wonder if we haven't taken a conservative, law-enforcer approach to getting school systems ready to achieve perfection. You know, one that is always on the look-out to spy what's gone wrong rather than what's working. 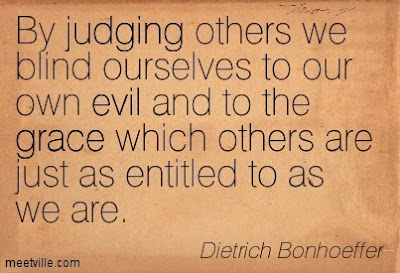 When a technology director requires strict adherence to district procedures, to the rules, he causes problems because he isn't in the moment, able to listen and change to meet the needs of those he serves. It was only a few years ago that many bemoaned the issues of blocking social media and Youtube, but now, many, have transcended that debate...and access has been granted. It is less an issue of technology lock-downs and more of nurturing global citizens.

As a long-time educator focused on transforming teaching, learning and leading with technology, I find myself struggling with those that do little than "exist" or "survive" in "broken" systems. Instead of simply adhering to the rules, I have to push myself to do more than exist or survive.

Meredith Allen (@msmeredithallen) refers to this brokeness, expressing her frustration with a SAMR cheer, in her blog entry, Broke:


Our educational leadership system is broken. I used to think that the majority of schools have supportive, thoughtful administrators that communicate with staff in a humane, decent way.  If you were a school without that support, you were rare. Right?
Wrong.  It’s a systemic problem that needs to be addressed and fixed.  Like, now.

For Meredith, it appears that educational leadership requires, at minimum, the following to NOT be broken...to be honest, that's pretty much all leadership, isn't it?

The SAMR cheer--I suspect it could have been a cheer about anything--was problematic because it suggests that "cheerleader" type behavior is sufficient to transforming education, not only of fixing brokenness or complying with the status quo, but leaving things better than you found them. In fact, for a leader to transform a broken system, that is exactly what is needed--to move education in a particular situation forward from where it was before. The SAMR cheer simply fits into how we have tried to change schools before. The cheer is disconnected from the reason for real change and is ineffective.

Think about what this means for schools today. We are often fighting to fix "broken" systems. These systems are broken, not because we don't want something wonderful to happen as individuals, but rather, that we are compelled, carried downstream towards the turbulent falls that symbolize defeat and destruction, because in spite of our best efforts, we are forced to engage in actions that perpetuate broken-ness.

Is it as simple as changing what we do every day to see the kinds of change? I don't think so, but that could be a starting point. Each of us, as we try to fix our respective "broken" systems, have to seek grace rather than allow ourselves to dwell in brokenness.

Some ideas for achieving "grace" in the midst of a broken educational system:
While this is not an exhaustive list, it is a list that would address 90% of the aggravation I hear folks share who are working in systems that fail to nurture. In the end, we can only be the change we wish to see in the world.

Will the obstacles we encounter fall short of the grace we allow to inhabit us?


By the way, you might find this worth reading, too: 5 Leadership Lessons Fig Trees Can Teach Us