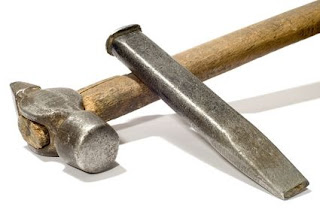 Over at Assorted Stuff blog, Tim Stahmer (@timstahmer) shares a real story--Chipping Away at the IT Barriers--about how IT staff--led by the CIO--didn't want to support a particular mobile device. However, this time, the leaders in charge didn't take "No!" for an answer and did an end-run around the entire Technology Department, obtaining support to buy the equipment.


A small group of principals here in the overly-large school district decided to bypass the usual bureaucratic channels, along with all the IT denials, and took their case for Chromebooks to directly our Deputy Superintendent (with a great deal of support and encouragement from our little cheering section).
To our surprise, he approved their proposal to purchase a limited number of the Google-based devices to test in their schools. The initiative only involves a few classrooms in five six schools so we certainly aren’t talking about any major shifts in thinking. But potentially it does represents a big crack in the IT barriers.
Of course, nothing is ever simple in our world. As you might imagine, our CIO1 is not happy.
The “Nonstandard Computer Exception Request” she signed (required by regulations) includes this pissy little declaration: “No requests for hardware or software support associated with these devices will be made to IT personnel.” It also forbids the schools from using the standard Google administrative dashboard to manage the Chromebooks, conveying the message: this is our sandbox, keep your crappy toys out.

Wow, that story sounded familiar! I ran into colleagues from a large urban district I worked in who complained about the exact same issue. In Tim's scenario, the mobile devices were Chromebooks, while in that of my nearby colleagues', it was iPads.

As a technology director, this is pure foolishness! Some key tenets that I keep in mind:


The CIOs in these two districts may be separated by a lot of miles, but they have the same mindsets--that their comfort is of primary importance rather than the needs of the teachers, learners and leaders they serve.


Comment: I don't know that I would  use the term "conservative" to refer to tech leaders who refuse to consider devices other than the ones they are prejudiced for.  Seems to me they are primarily possessive and inflexible--usually to avoid any complications that might (or in the case of Chromebooks might not) be involved in supporting different devices.  I was very grateful to work with a tech director who was always open and who would do anything to support the education process that he could get funding for.  Others are not so fortunate.

Response: Thanks David, I adjusted the blog title!

It seems your district may share a problem with a lot of schools that I have come in contact with (and hopefully people would not say that about mine - but I suppose they might).

There is a pretty wide chasm of understanding between the departments leading to both an, "us or them" language, and what looks like assumptions about motivation that may or may not be correct (wanting nothing but Microsoft blessed devices, motivated by job preservation, ...).

I can probably guess decently how the story will continue to play out since it is a well-traveled road (unfortunately).

IT departments gravitate towards standardization and that is really at odds with today's consumer-driven technology economy. The ideals can coexist, but I'd suggest some give and take in the conversation and at least some attempts to understand both sides of the issue.

Why standardization? The very real reason is that for every new decision that diversifies the device, it will really cost somebody in real time and/or money - more to run the operation. Sometimes it is small (Chromebook overhead is not too bad), and sometimes it is massive (iPad overhead is, quite frankly, a lot of work). It is nice to say that they can just manage themselves, but not very realistic. Aside from the very real issue of increased costs to the organization, there could always be other motivation - such as resistance to change, concerns about what the change means, ...

On understanding the education side of the issue, teachers are generally starved for access (in schools that are less than 1:1) and we work in an industry that is constantly looking for new ways to do things - and would like to spread the dollars out if it means more access for more students.

But, there are a lot of red flags in the post. The "educators" -vs- the tech department... What seems to be no visible process for this decision to be made other than, try... hear no... get frustrate, .... go up the chain of command for a different answer, .... get a different answer. The details of the post position what happened as a victory for teachers and that the IT department perceives it as a loss (at least from what I am reading).

It should never have been a battle in the first place because the victory (or loss) is completely dependent on the whims of who is sitting in the Deputy Superintendent chair (and before it reached his/her level), the whims of CTO's chair. That is nice when it works in one's favor and sucks to be you if it doesn't. However, wouldn't it seem better to have a visible process with participation from stakeholders that can make smart educational and fiscally sound choices?

It would take a lot of work to turn this into a better process and unfortunately, I think some damaged feelings are not going to be easy to overcome to move in the right direction. For the recent winners - why would you change (and the answer should be because this really isn't a great way to do this, and the current model runs the risk of poor decision making by alienating those who need to help make it work). For the recently stung technology department, they may have aversions based upon what just happened and as evidenced in the response you copied/pasted that shows signs of resource withholding.

Miguel Guhlin (@mGuhlin) said…
Joel, profound implications. Yes, it would be great to not celebrate victories among teams that should have mutual respect and mutual purpose in solving educational needs. Unfortunately, in large districts, departments and teams compete for budgets and control in the face of chaotic environments made worse by powerful personalities who have a purpose, just not the one educators should have. I have observed these problems firsthand.

So I sympathize with those stuck in these tough situations, both the winners and losers, but I can't help but think, thank goodness I'm not in that mess. In the end, if the system-wide processes are not in place to involve relevant stakeholders in a decision, it's would be nigh impossible for any one person to overcome...it would be miraculous, heroic, though. Join me in singing Mariah Carey's, https://www.youtube.com/watch?v=0IA3ZvCkRkQ
July 17, 2015 at 8:06 AM