Image above Created by Susie Highley (@shighley)
I recently read somewhere that if you add an image to a tweet, that increases the chance people will click on the link. With that piece of information in mind, I was surprised to see a retweet of my blog entry, Tearing Down False Gods, by Aaron Davis (@mrkndvs) that included just such an image: 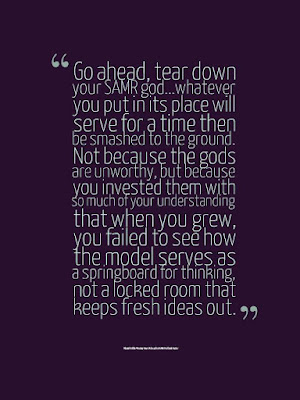 Aaron has certainly raised the bar for retweeters, right? Consider some of his other creations that he houses at Flickr:
I asked him how he was making these, and he cited a few tools, tagging Bill Ferriter (@plugusin), who also contributed:
What do you use to "image your quotes?"

Anonymous said…
I've used oneshot on iOS and the 'Tweet Shot' facility in instapaper. Bit worried about accessibility, bandwidth ect. replacing text with image (but not too much).
June 14, 2015 at 11:40 AM