- November 13, 2014
The word "coterie" refers to a group of folks with shared interests. Social media--Twitter, Google+, Facebook--makes connecting with people all over the world easy and possible. We are all increasingly part of social media coteries. Does social media make connecting too easy?

Dougpete, as I know him via Twitter and Plurk, makes this point at Off the Record:


It’s a phenomenon that happens at every conference.  People see the value of social media and want to be part of it.  Accounts spring up; Twitter and Facebook messages abound; blogs get started.

Sometimes, it continues.  Sometimes, it doesn’t.  Sometimes, it goes into dormancy until the next PD event. It’s easy to get swept up with things at a conference.  After all, there are so many new people, new topics, new things, new thinking. Then, you return to reality.
But why should the enthusiasm stop?  There are great things that are happening in your reality all the time.  Why not share that with the world and continue the process of making connections that you started at the conference?  We all know that learning doesn’t stop – why should the sharing?

The reality, of course, is that many folks sign up for Twitter but then forget about it. It's not a daily habit or practice. They leave the conference with no leadership strategy, only a vague expectation that they will share what they have learned, casting knowledge on the waters to see if it floats (it doesn't).

Imagine saying to these same individuals, "What are you learning every day and how are you integrating it into your life or work?" It reminds me of the argument for blogging--if your life is real, you learn a lot each day; why not blog about that learning experience? 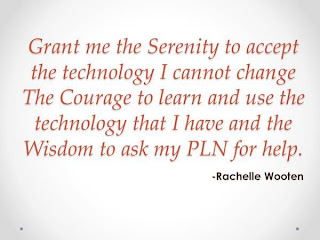 In college, a friend dragged me off to a Catholic cursillo, which is defined in the following way and reminds me of what should happen at conferences...the intent is the same, no?


Cursillos in Christianity (in Spanish: Cursillos de Cristiandad, short course of Christianity) is an apostolic movement of the Roman Catholic Church. It was founded in Majorca, Spain by a group of laymen in 1944, while they were refining a technique to train pilgrimage Christian leaders.
The Cursillo focuses on showing Christian lay people how to become effective Christian leaders over the course of a three-day weekend. The weekend includes fifteen talks, some given by priests and some by lay people, those talks are called "rollos". The major emphasis of the weekend is to ask participants to take what they have learned back into the world, on what they call the "fourth day".  (Find out more: Wikipedia |

It's easy to see the similarities between these "short courses" design to help people become effective leaders in 3-days (the typical length of an ed-tech conference). We seem disappointed that "the fourth day," which is when the leaders are to take what they have learned back into their respective worlds, fails.

Doug's points are well-taken--as if 3 days of seeing great things other people are doing in their districts could be taken back and result in a change. Change happens slowly, it has to rely on a vibrant community that is willing to support the leaders. In education, "leaders" return from conferences to hostile environments, missionaries for truths that have little incentive in supporting or advocating on behalf of. Of course, truth doesn't need an advocate...it can stand on its own because it exists outside of any one perspective or viewpoint...it is absolute.

In edtech, truth is a little more variable, questionable. Why should we pour money into technology when teachers can barely do the paper only versions of writing/reading workshop or PBL or [insert your favorite initiative here that will change learning forever]? That question is problematic because it means edtech advocates are essentially helping others discover a new reality, trying to set in practice new ways of being and doing.

The aim of the Cursillo:


What the Cursillo seeks is that Christians learn how to live out these truths, rendering them evident and embodying them in their day to day life with faith that is alive and with human naturalness, so that they may stimulate one’s life and enable one to spread happiness, so that the baptized person may discover, not only his function but also his mission which, through carrying it out and spreading it in his normal daily life, he gradually discovers the meaning of his life and the joy of living it under the light of God, together with his brothers and sisters. (Source: October, 2014 newsletter, National Cursillo Center)

The aim of the EdTech Conference [forgive the tongue in cheek revision]:


What the EdTech conference seeks is for educators to learn how to live out the new truths they have discovered, embodying them in their daily lives with a belief that is alive and natural. The reason they want to do this is that they want to stimulate their own life and that of others, so that all may discover their ultimate mission--discovering the meaning of an enriched education and the joy of learning in reflective collaboration with others.

Funny, huh? This also raises a more profound question. Is our pursuit of technology a facet of our ongoing effort to express the divine in our lives with others as social, human beings?


"Sometimes human failure is only the beginning of even greater Divine successes." - Eduardo Bonnin