March 03, 2014
This message recently landed in my inbox and it's worth checking out:


The National Center for Women & Information Technology funded a grant to run a middle school program to get girls interested in computing. The resulting program is called TECH Camps, which stands for Trinity Encouraging Computing for Her.  Girls in grades 6-8 students are the intended audience; check the flyer below for more details. Cost is $50 but scholarships are available.

Over two Saturday events and one weekend retreat, girls will learn how to create an Android app using MIT's App Inventor, explore wearable technology, and create 3D Printed objects. And these are just some of the activities!

The TECH Camp events start March 29th, so getting the message out as soon as possible is imperative.

TECH Camp web site, as of this posting, still needs a little work but you'll want to check back. 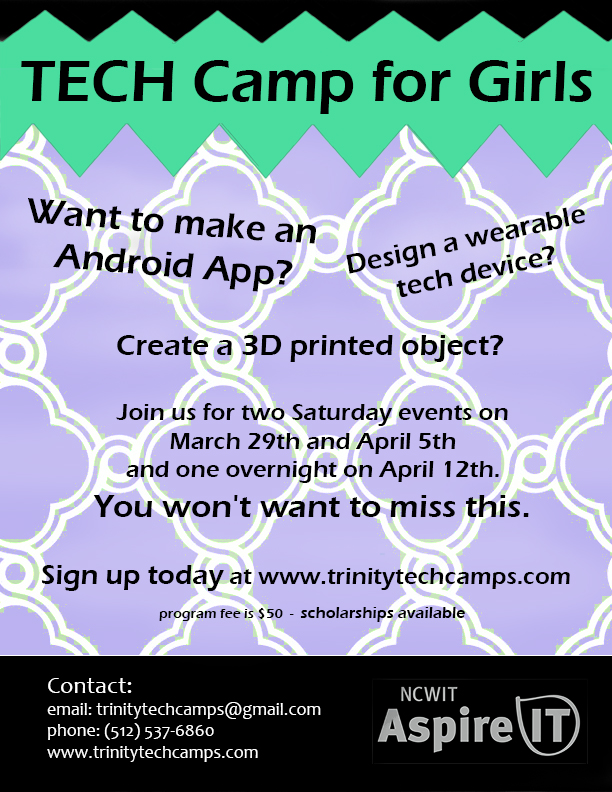 I can certainly attest to the value of these camps to have a profound impact on your life...here's my story:


I'm often asked, "Miguel, how did you get into this work (e.g. technology director)?

You could say, I got into this line of work by the sink or swim method. Unfortunately, at 10-12 years of age, I sank at Trinity University's Camp Chip-A-Bit, a wonderful program that I was wholly unprepared for having arrived from the Republic of Panama.

My Dad thought I should learn about computers. My Dad exhibited a quality I fear I lack--being able to pick the next big thing. He picked computers and sent me off to Trinity University in San Antonio, Texas. I attended the Camp and from the first moment felt overwhelmed and out of my element. And, I was.

About the only thing I learned was to play Outpost, an Apple //e game, on the computer. BASIC programming? Well, I worked with another kid but he was clearly a programmer and I was just trying to hang on. So, I played Outpost and he wrote the program for the camp. I first wrote about my experience here:

When I was 10-11 years old, I worked on Apple ][ computer at Trinity University's Camp Chip-A-Bit. I was supposed to learn to program in BASIC but couldn't quite manage it...who knows, my failure to learn programming of any sort may stem from that unsuccessful experience, but I doubt it.... The computer was FOREIGN to me, a strange technology I had no idea about. Then, when I was 13 years old, I worked on an Apple ][e and ][c, then when I was 20, on an 8088. When I was 22, on a 386. Then, after that a Macintosh. Now, on Linux.

Across all those computers and operating systems, I learned the tools needed to get the job done--word processing, file management, zipping, formatting hard drives and disks, telecommunications. It didn't matter what the OS, I just learned it to get what I wanted. That's what we need to emphasize.

That summer, my dad dropped a few thousand on an Apple //e, printer, etc. and i started exploring computers. I traded programs with my friends, I was the only guy in my High school Junior English class to turn in my book reports typed up using PRINT statements. It was easier than writing it out by hand. I hadn't yet been introduced to a word processor. So, from early one, I learned to use my Apple //e to do classwork, and later, work. In every job situation, what I learned how to do at home--such as the time I used a database to track student scores, or HarvardGraphics to make graphs to share with staff--I would apply in as many other situations as possible.

Soon, people wanted to know what I was doing and to start teaching them. So, I did. I shared as much as I could with others. Eventually, that led to leadership positions (with the title, I mean) and I started getting paid for sharing. I wrote about my experiences, more as a way to document them, and others wanted to publish them. Now, I feel like I'm riding atop a wave of past work...while I continue to do what I've always done--trying out new technologies, sharing my experiences with them with others--the audience is...bigger. And, they are certainly listening.

I can trace my first experience with technology back to Trinity University's Camp Chip-A-Bit. If you haven't taken advantage of a program to introduce YOUR child to technology, then I urge you to do so! Who knows what she will end up doing?


Make Donations via PayPal below: