In the Past - 3 Words to Avoid

December 20, 2013
"In the past," began my veteran secretary at my new job, "we would...." Of course, I listened attentively. After all, I've been told that is one thing I do well. But if you imagine that "In the past" is what we continued doing, well, that would be less than accurate.
When I started a new position in a large urban school district, one of the phrases that people were fond of using was, "In the past." Almost every utterance that meant to forestall change began that way. As if "In the past" would actually have the power to stop impending change.

My new boss, an assistant superintendent put in the position he was in so that he could be forgotten by the District (a mistake since he was/is a brilliant individual who made the best of a great situation), loathed the phrase, In the past. It was a personal affront to him. If you started a conversation with those words, you had to be prepared for a drawn-out discussion exploring why the past was the past, and why change was necessary. Of course, I picked up on this perspective quickly (I was new to the District) and helpfully coached my veteran secretary (she later left the team) along with my team to NOT use that phrase, even when they meant to say it.

Dan Rockwell (Leadership Freak) says that people cling to the past for one of 4 reasons:
Dan then offers some excellent suggestions well-worth meditating on and applying.

Since that time (over a decade now) my secretary started every other utterance with In the past, I have read Crucial Conversations/Confrontations, and my perspective on change is significantly different. Now, if it takes 6 months to bring about a change, I ask myself, "What conversation am I not having that is impeding change?" I have to reflect on what conversations that I'm not having that prevent forward movement because, sad to say, it's easy for me to put my head down and forge ahead without really being aware of those un-said conversations. It's so easy to make unilateral "flash in the pan" decisions.

In Dr. Cook's blog entry, he shares this perspective from Todd Whitaker (Shifting the Monkey author):


Change does not take a long time! People love to say that it takes a long time because they don’t want to work hard. For example, have you ever had an out of control class with a marginal teacher (could be a substitute, maternity leave replacement, or even a tenured teacher)? You take another, stronger teacher and put them in that class, and next thing you know it’s a different class? Change doesn’t take a long time, unless you are averageGreat people do not see the “before.” Continuing that example from above. The great teacher that comes in, and turns things around does not need to know what happened before. They take ownership of the class, and move forward

I suppose I might change that highlighted section. Our notion of teaching is still centered around the one person who controls everything from the front of the room. Maybe, we could revise that to read:

The great leader that comes in, turns things around, does need to know what happened before. Only, that leader finds a way to share ownership of a future that others can support, then moves forward, enabling others to see what they couldn't before--a future that captures the best of who we and the organization can be when we "synergize."

Ok, that's probably a terrible revision, especially with the fake word "synergize." But this is a blog entry not a peer-reviewed journal and I'll leave it for today. 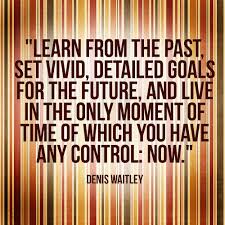 Make Donations via PayPal below:

timstahmer said…
A three word substitute for "in the past" in our district is "the Fairfax way". As in "What you're proposing is not 'the Fairfax way'" or "We need to make that fit 'the Fairfax way'". It is an incredible impediment to change since the utterance of that phrase by someone often shuts down any additional discussion of exploring a different, possibly better, approach to a problem.

In July the district hired a new Superintendent and sadly, last week I read about her using the phrase in an interview.

All of which doesn't mean that change isn't happening and that some of us aren't purposefully ignoring 'the Fairfax way', trying ideas that are not part of the tradition. But as you noted, the attitude represented by our phrase or 'in the past' does not validate most people to courageously move forward. Instead we get lots of little changes being implemented off the radar and hidden from the people who most need to see it.
December 20, 2013 at 8:10 AM