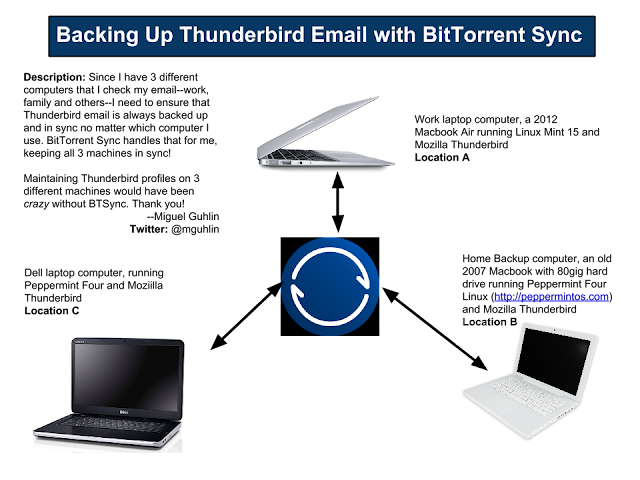 A few weekends ago, I realized that I didn't have a backup of my Thunderbird email (over 5 gigs) anywhere except on one machine. This is a big deal because I have LOTS of email from multiple personal accounts (such as for my elderly mother, which I monitor on her behalf), as well as work accounts that I like to keep an encrypted backup of.

The biggest challenge I faced included backing up the .Thunderbird folder. Although I'd tried saving my Thunderbird profile to an external USB flash drive (and eventually a hard drive), I just couldn't get it to work. When I'd made backups of the .thunderbird folder on my Linux installations (Peppermint Four and Linux Mint 15 are working great!), I was always unable to restore them. There would be some configuration or something goofy (prob me) that couldn't get it working again. Worse, I'd corrupt my Thunderbird profile, which meant loss of email and I'd have to restore from backup.

Since I am running GNU/Linux on all 3 computers--although I obviously started with just two for testing purposes--it wasn't difficult to load BitTorrentSync on all 3 machines and let BitTorrent Sync work it's magic.
This solution works best if you have machines that have similar operating systems. For example, you'd want to sync two linux machines, two Mac machines, or two Windows machines. If you sync'd from Mac to a Linux, while you'd get the data loaded or moved over, you'd have to adjust your profile settings to match:

To accomplish the magic with your own setup, I encourage you to follow these steps:

2) Pick the computer that you use the most, that you have Mozilla Thunderbird on, and then...

3) Start BitTorrent Sync and add the Thunderbird Profile folder for your operating system. 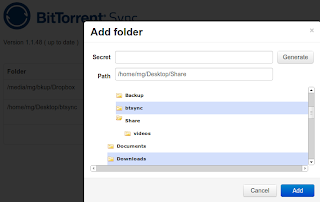 4) Get the "secret" for that folder and use it when adding new folders on your other computers you want to sync with. 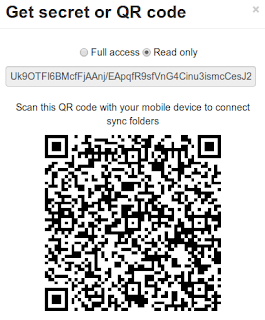 5) Step back and watch it in action! You can monitor progress on any of the computers with BitTorrent Sync installed by opening a web browser and going to http://localhost:8888

Thanks to BitTorrent Sync, and to Mozilla Thunderbird for two free open source alternatives to keeping email OUT of the cloud.

Be sure to read this article on Sync Hacks when it appears!

Jo Davis said…
Wow this was super helpful. And I could definitely see how having that backup on only one machine could be nerve racking.
October 13, 2013 at 7:59 PM