Showing posts from September, 2013
Show all

Note: This blog entry is part of a series entitled,iPadifying the Writing Workshop.

#3 - RE-IMAGINE ELEMENTS OF WRITING WORKSHOP Our job as writing workshop facilitators can be pretty harrowing. Even a paper-centric writing workshop involves juggling colored sheets to create books, setting up writing centers, helping students deal with the daily struggle of journals and journal responses, and, crafting mini-lessons that engage and endure. The focus is always on student writing. As workshop facilitator, you can work to find the answer to the question, "How can technologies we now have make the HOW of writing workshop easier for the teacher?"

The Mini-Lesson; The Status of the Class; Write/Confer; and Group Share. 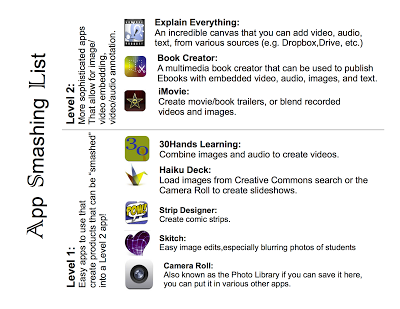 Note: This blog entry is part of a series entitled,iPadifying the Writing Workshop.
#2 - MAKE APP-SMASHING A DAILY ACT OF CREATION "iPads are our best option for regular and special needs students in K-12," pointed out a teacher. "They are so versatile and meet the needs of students." Students are now using iPads to create digital books, a.k.a. ebooks with Book Creator, that incorporate text, images, audio and video in their creations.

Students can take what they make in one iPad app, save it as a picture or video into the iPad’s Camera Roll, then use that creation in another app. This process is called “app smashing.”

Below, please find a short list of app smashing apps you can use. You may also want to get your own free copy of The Ultimate App Smasher's Guide, an ebook I put together one evening using Book Creator. 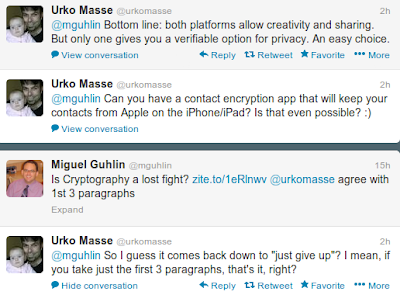 Over the last week or so, @urkomasse and I have had a twitter conversation. In it, he gently takes me to task for advocating the use of iPads in schools. The main critique is that Apple, unlike Android, is probably "in bed" with the National Security Agency (NSA).

Worse, encouraging the use of iPads among children makes them more susceptible the spectre of "trusted computing," a term I've often used in reference to Windows computers and for which I must rely on Richard Stallman (of GNU fame) to define clearly in Can You Trust Your Computer?
Who should your computer take its orders from? Most people think their computers should obey them, not obey someone else. With a plan they call “trusted computing”, large media corporations (including the movie companies and record companies), together with computer companies such as Microsoft and Intel, are planning to make your computer obey them instead of you. (Microsoft's version of this scheme is called Palladium.)…
1 comment
Read more

Note: This is the 2nd in a series on iPadifying the Writing Workshop.
#1 - AIM FOR ENGAGEMENT “More milk!” demanded my son, thrusting his hand out from his place on the couch. His words caused my father, gone since October, 2006, to jump from his Lazy-boy recliner to refill the bottle. As the video plays on, showing picture after picture featuring a grandson and his doting grandfather, brilliant white hair growing back after chemo-therapy months before dying, I realize how I miss him.

Telling that story isn’t something I did for a workshop assignment, but to remember, to immortalize a memory hovering at the edge of forgetfulness.

Story isn’t a frill in human life—something we do just for kicks. Story is a vastly powerful tool. By educating ourselves about story, we can use to learn that power in our own lives. (Source:Daniel Pink's blog, Interview with Jonathan Gottschall, author of The Storytelling Animal)

“Whether it’s something that happened twenty years ago or only yesterday,” sa…
Post a Comment
Read more

About this Session
Title: Flipped Classroom Learning
Facilitator: Miguel Guhlin Description: In this session, participants will become familiar flipped classroom learning possibilities and iPad/computer apps that make video recording easy. They will also be introduced to Twitter hashtags that allow them to follow other Flipped educators (view example of a Twitter chat #flippedpd).
Before Session In a typical flipped classroom, students listen to pre-recorded video lectures before class and perform other learning activities in class. In this flipped structure, students are exposed to material before class via videos and readings, and they attain deeper knowledge in class via activities. We are doing the same in this workshop session. View Flipped Classroom Video: Watch this short video on flipped classroom learning. Composing Video Reflections: Write 5+ sentences with your initial thoughts, concerns, questions, and ideas regarding the information that you just learned from the video.Sharing…
1 comment
Read more
More posts