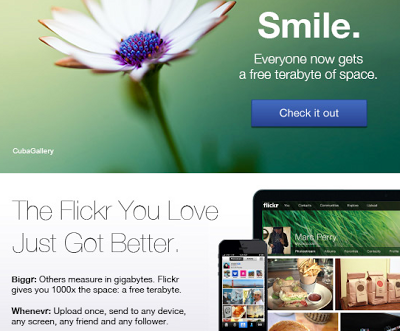 Ok, I've already paid my $40 for two years of Flickr, moved much of my image collection over there from PicasaWeb--which was murdered by Google in its attempt to make Google + more attractive--but Flickr has left me desiring more.

As I heard on NPR today, Yahoo acquired Tumblr. But everyone is hoping that they won't do to Tumblr what they did to Flickr and Delicious...let them languish into near obscurity or worthlessness. Still, Flickr appears to be trying to do something different, maybe Yahoo's attempt to say, "Hey, we still care." But a terabyte of storage...well, who cares? I have 9 gigs of photos, but a terabyte isn't going to turn me into an avid photographer.