What's Lost When You Go #iPad - Dealing with 5 Concerns

May 20, 2013
"What else is lost when we go to iPads?," asked a colleague from a school district. His question threw me off a bit as I pondered it for a moment. What's LOST? I reflected, wondering what had been lost. Then, I stumbled around a bit, I ran across this link +Lisa Johnson (@techchef4u) had shared to what had been learned after a year of 1 to 1 iPads: 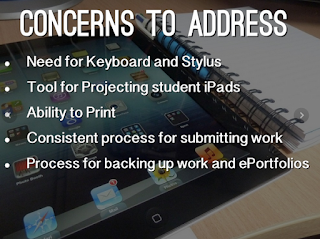 As you can see from the slide, the presenter highlights some key areas. As I review these concerns, I don't see them as insurmountable issues that block iPad adoption. And, a concern I don't see that one would think might be a show-stopper, isn't listed. More on what that concern is later.

For now, let's take each of these concerns in turn:

1) Need for keyboard and stylus.
One of my first efforts as an iPad user was to get a keyboard. I use my keyboard for wrting, blogging, typing in notes during meetings. In fact, I can't imagine my iPad without a keyboard attached or one nearby. However, a lot of the work that gets done on an iPad--such as Haiku Deck presentations, adding captions to images, words in comic strips with Strip Designer--don't require a keyboard for dissertation usage. Why not invest in 4-5 keyboards and make those available in an iPad enabled classroom? For me, the real magic isn't the focus on words, but on video and audio projects available. After all, Garr Reynolds' advice (Presentation Zen) is to avoid lots of words on a screen...and the era of Powerpoint is over.

But for serious writing, that is getting in the flow of writing, I don't see it happening without the keyboard. As to stylus, I seriously wouldn't waste my money. That's MY preference, though.

2) Tool for Projecting Student iPads.
The Reflector app on a Mac is absolutely wonderful and I've used it to share my iPad screen via a digital projector. It's inexpensive, works on Mac and Windows and also routes audio from your iPad to the Macbook. That means if you have a sound system hooked up to your Mac, you don't have to mess with unplugging cables and plugging them into your iPad.

Of course, I still carry my iPad dongle so I can hook up directly to a digital projector.

3) Ability to Print.
This is easily solved. You can invest in an AirPrint compatible printer (Dell is now selling them) or setup your ipad to print via IP address to a network printer--which is how laptops and/or computers print to a network printer--so that's pretty easy. You can use an inexpensive app like Print Central ($8.99) to enable your iPad to print just like your other devices.

4) Consistent Process for Submitting Work.
Yes, it's actually quite easy to submit student created work. If you can get that work into the Photo/Camera Roll, then you can easily "collect" or submit it. The best way is to use Google Drive, since it's gotten quite easy to submit work. Or, if you prefer, Edmodo.com. There are many other possibilities, but Drive is the best (unless you want to use Dropbox, but their terms of service don't make it easy for under 17 year olds).

If you don't want to depend on cloud storage, why not show students how to get their work from their ipad to a computer (or the teacher's iPad) by using Readdle Documents?

5) Process for Backing Up Work and ePortfolios
Creating ePortfolios can be tough. In addition to merely getting work off the iPad, you have to find a system that students can use their iPad to interact with. Again, using GoogleDrive works well since students can store their work and then create a document that links to that work.

The Real Issue - Workflow
So, what's the main concern not listed? Workflow. To achieve all this on an iPad, you have to step away from the side of the pool and venture for the deep-end of iPad workflows. Most people I've seen don't have the desire to learn how to do something on an iPad. They start, but then quickly give up when it comes to backing up work, creating content. Why? I'm not sure. The iPad is a phenomenal creativity engine but you have to gas it up...and your imagination is the fuel.

What's lost when you go with an iPad over Chromebooks, etc.? Well, it's not about what you lose, but what you gain and whether you have what it takes to push yourself to learn a new workflow. If you won't do it, then the iPad will end up as yet another failed technology in K-12 schools.