Ok, it may seem like such a little thing--No RSS Feed for Public Folders. That's what Evernote threw out in April, 2013 with little advance notice to its users. In my case, I had over 23 IFTTT.com recipes and an equal number of DLVR.it RSS to twitter processes that immediately failed and because there'd been little notice given, I had to go looking for it. Yes, that means that content that should have been delivered, wasn't.

Of course, Evernote remains a wonderful service sans RSS. However, that bit of irritation at the start of my week enabled me to to look for alternatives, and to transition from storing all my content in Evernote to something else (mainly, Dropbox). What's more, I honestly believe I've arrived at a much better content curation tool, one that I already was using but didn't fully appreciate. Change is the nature of the beast with technology, but you can hope that when you're a "Premium" (bah!) account user who's paid in advance, that the platform of services available won't change under your feet.

Worse, Evernote NEVER attempted contact in spite of multiple tweets directed at their accounts. What's up with that?

Here's a round-up of the blog entries that document my journey away from Evernote, resulting in my cancelling my subscription (recurring) earlier today: 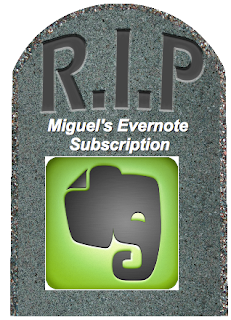