March 01, 2013
As long as I can remember, the term "it's a dog's life" has meant something other than a life of misery and suffering for the dog. I remember the first time it was introduced: Our family beagle was flopped down on a rug, in apparent state of sleep at the end of a long, tough day for the family. While we had suffered, endured hardship, the dog had not. His life, his happiness was assured.

The expression "It's a dog life" has often meant that the dog suffers because they're working animals (e.g. think huskies pulling a sled in Alaska, St. Bernard's rescuing lost travellers, etc.). In my family, our dogs have always been lick-monsters and cute companions who elicit laughs and smiles. 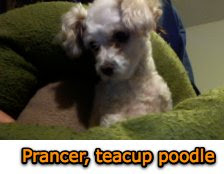 Times are changing. New technologies encroach on the dog's freedom. These canines are persecuted by do-gooder humans. Consider the long line of injustices imposed on these poor critters:

These indignities aren't the only ones dogs must suffer. The time is fast approaching that dogs won't enjoy all the freedoms they once had. One of those freedoms, the liberty to poop in anyone's yard may soon disappear.


Starting Friday, a San Antonio apartment complex will start DNA testing all residents' dogs. The reason? They'll start testing dog poop that isn't picked up so they can fine the dog's owner.WHAT DO YOU THINK?Watch the story --> http://bit.ly/XnyvP8


Warrantless DNA testing for these companions who've had to endure so much.


The Supreme Court on Tuesday struggled with what one of the justices called its most important criminal procedure case in decades, whether to let police take DNA without a warrant from those arrested in hopes of using it to solve old cases.

Justices seemed conflicted over whether police have a right to take genetic information from dogs who have only been arrested without getting a judge's approval first, or if the government's interest in solving cold cases trumped the immediate privacy rights of those under police suspicion of other crimes.


One justice seemed to make clear what he thought. "I think this is perhaps the most important poop case that this court has heard in decades," said Justice Andy Notalthere, a former prosecutor.


"This is what is at stake: Lots of pooped-on yards, lots of sudden deaths from high blood pressure resulting from heated arguments can be solved using this new technology that involves a very minimal intrusion on personal privacy," Notalthere said later. "Why isn't this the fingerprinting of the 21st century? What is the difference? If it was permissible to style any dog's hair any way we wanted to make them look distinctive, why is it not permissible to take a DNA sample from any dog since dog DNA tracking is one of the most unique ways to stand out from the pack?"


Getting DNA swabs from criminals is common. All 50 states and the federal government take cheek swabs from convicted criminals to check against federal and state databanks, with the court's blessing. But now some want to take samples from animals who have done nothing more than exercise a generations longstanding practice among dogs--defacating anywhere they want, irrespective of the lawn owner's societal, economic status.

Adapted without permission from: http://www.myfoxdfw.com/story/21418225/should-police-take-dna-without-a-warrant-court-must-decide#ixzz2MHyVDa4r