"At the end of last year," shares Mike Gras, 2012 TCEA Technology Administrator of the Year (White Oak ISD), "I saw kids in labs using USB cables plugged into PCs, mostly for charging, I think.   Since most of the desktops we have can charge 4 smart devices at once, I see a need to keep them around a while longer." That remark makes you wonder, maybe we're spending too much money powering desktop computers just to charge mobile devices, doesn't it?

We are going to implement some BYOT this year. The superintendent would like to know if other schools already doing it provide charging stations? If so, what type?

First, wow, isn't that neat you have superintendent level support for how BYOT devices will be charged in a school? Goes to show that BYOT is a hot-topic and enjoys top level leadership support. Wouldn't it have been neat to have that support, I'm sure some are wondering, back in the day when technology integration was being pushed? Of course, BYOT is an idea whose time has come...if you're not doing it, you're out of sync.

It makes you think hard about a point that Doug Johnson (Blue Skunk Blog) highlights in a recent entry:

The Paradox of Teachers and Technology in the U.S., Larry Cuban's July 30th blog post has been haunting me for the past couple days. (Read it all.) In it he observes:

Teachers–most of whom already use an array of electronic devices at home–are expected to use new technologies in classroom lessons but have little to no say in determining which devices and software they will use and under what conditions. That is the paradox that champions of technology–including philanthropists, software engineers, programmers, and CEOs–fail to understand or if they do understand choose to ignore.

While I don't disagree with that completely, there's an idea, maybe even a movement, growing that says, "New mobile devices are so easy to use, we don't need special expertise. We just need to use it." In fact, in a conversation with a principal recently, that was the idea underlying his remark:

In the day, you had to know all these different technologies to produce a video. Now, with an iPad, it's a lot easier.

I didn't disagree. The iPad replaces the digital audio recorder, the digital camera, video camera, and computer quite easily. And, with plans to replace the computer lab as the testing platform for Pearson high stakes assessments, the iPad will transform schools...it IS the magic bullet, right?

Still, the danger is continuing to use the iPad in the same old way...if we use the SAMR Model, many teachers will start at the substitution level...here's my remix on that: 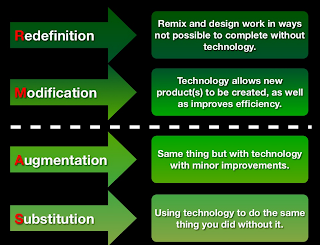 I love how one Texas superintendent put it to me, quite directly: "We're spending too much money to have instructional activities at the substitution and augmentation level." Hear, hear! 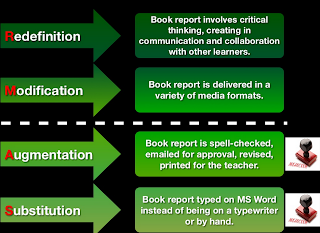 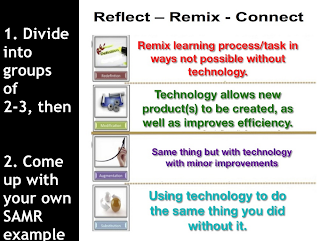 BYOT without consulting the teachers introduces the same old problem--unless you help teachers learn new ways of approaching teaching and learning, you're still facing the same old problem. And, I have to agree with Doug that in most school organizations, teachers are dis-empowered and have little say over anything, and, given the latest legislative attempts to tear public schools down, about their future. 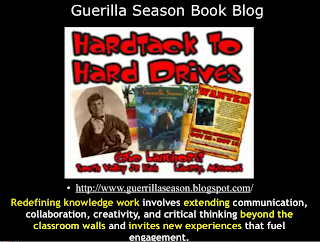 However, becoming aware models like SAMR, using those in the classroom does restore power to the teacher. Perhaps, not the power to stop the technology from coming into the classroom, but find a way to more authentically engage students with it.

Second, back to the BYOT charging, it's fascinating what kinds of questions DO pop up. Should the superintendent's focus be on charging stations or heightening the level of technology use within instruction, not only for classroom teachers but district level curriculum staff?

Note: SAMR related slides in this presentation come from a slideshow I shared last week with school district leaders. The entire presentation with sources and citations may be found here.

Visit the Texas for Technology Enhanced Education
Everything posted on Miguel Guhlin's blogs/wikis are his personal opinion and do not necessarily represent the views of his employer(s) or its clients. Read Full Disclosure