Review - Scourge of the Betrayer @jeffsalyards 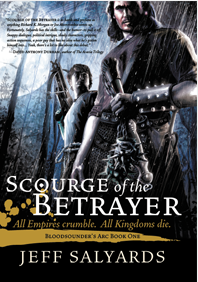 "A writer without curiosity is like a bird without feathers" has to be one of my most favorite lines ever, and it appears in Jeff Salyard's debut novel, The Scourge of the Betrayer, a sword-n-sorcery tale featuring as protagonist, a boy scribe. The young writer journeys with soldiers on a mission, his job is simple -- chronicle the journey, a trek that poses questions at every turn, leaving the reader hungry for more at the last page...check it out on Amazon.

When I picked this hardback off the shelf at the library--my niece was checking out the big books in the children's area under supervision--my hope was that it would entertain for a short time, not commit a compelling cast of characters to memory and leave me anxious for a sequel.

Here's the source of Jeff's inspiration:

I’ve always been fascinated by embedded journalists. Chronicling a military campaign right in the middle of the action rather than second- or third-hand, at a safe remove. It’s hard to get more visceral than that—dust in the face, grit in the teeth, adrenaline thumping, shadows jumping, blood splattering immediacy, all while trying to just stay alive long enough to somehow give what happened some kind of coherency.

Whether book or article, writing is often a solitary, quiet affair, but writing front and center on a military endeavor changes the whole ball game.


Being a self-professed geek (at least 12th level), I naturally take observations like this and start plugging them into a fantasy scenario. How would this play out with a quill and ink on a different world, and how could I complicate it to make such a chronicler’s life even more hellish than anything your modern embedded journalist might endure?

I highly recommend the book!

Visit the Texas for Technology Enhanced Education
Everything posted on Miguel Guhlin's blogs/wikis are his personal opinion and do not necessarily represent the views of his employer(s) or its clients. Read Full Disclosure
Book Review