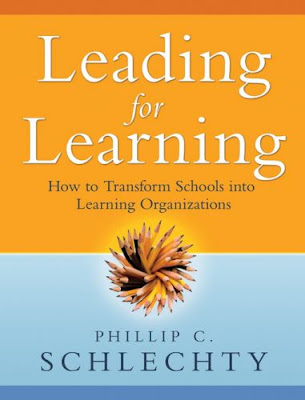 Wow, it's been forever since I had the opportunity to read and take notes on a book or article. Let's hope it won't be so long for the next one.

The next two books I'm taking notes on are Philip C. Schlechty books, Working on the Work and Leading for Learning. The latter comes to me from my supervisor in my new workplace, and as soon as I started reading it, I realized I'd want to take notes on my take-aways concepts.

Reading the first chapter, The Case for Transformation, made me think of Chad Segersten's and John T. Spencer's blog Education Rethink and the chart Chad created that distinguishes between culture and climate. He describes it using this table:

In the comments, an administrator leaves this further elaboration:

Culture means the way we act as a school community. School culture can be defined as the beliefs, attitudes, and behaviors that characterize a school in terms of how people treat and feel about each other; the extent to which people feel included and appreciated; and the rituals and traditions reflecting collaboration and collegiality.

School Climate refers to the quality and character of school life. Climate reflects the way people are engaged and respected. The healthier the climate, the more educators model and nurture attitudes that emphasize the benefits and satisfaction gained from learning. One of the fundamentally important dimensions of school climate is relational and how “connected” people feel to one another in school.

All of this is another way of saying what the Crucial Conversations/Confrontations authors point out--you have to "make it safe." The conditions of safety include considering the following two key points:
Without these two conditions of safety, you might as well forget about trying to build climate/culture. Since I really like the Crucial Conversations/Confrontations books, I'm going to follow through on the ways you can rebuild mutual purpose or mutual respect using the 3 skills the authors propose:
Well, making that connection took longer than I expected but we so often speak/write about the importance of building a climate of trust but seldom address HOW to do it. That's why I like the CC books because they provide the hands-on, how-to rather than just speak to the importance of building a climate of trust based on our human relations skills, all of which often vary from person to person.

For me, Leading for Learning has to address these human relation skills in the context of a larger purpose--transformation--rather than just focusing on the need, data justifying change. Let's see how the author does in that regard....

MyNotes
A quick aside here from my reading of the book - is it possible to compare bringing netbooks as more efficient avenues of reforming schools' access to technology, and iPads as a way of repurposing and reimagining schools where computers are not central to our vision of schooling? I'm not sure, but it might be worth exploring, don't you think? Ok, back to the My Notes:

You know, I did not honestly expect such a thorough embrace of technology or the challenges opposing technology in schools presents for leveraging peer group and tech for positive ends. The most telling point for me is the disintermediation of schools...it's been true for years, and becomes more widespread every year as students are introduced to technology. When launching BYOT initiatives in schools, are we honestly prepared for the complete disintermediation that is possible if we embrace BYOT without transforming our own teaching and leading practices?

Another point that is particularly striking for me is the idea that game designers allow children to "fail forward," a John Maxwell term. He defines failing forward in this way:

Failing forward tells you how to look at life’s setbacks and learn from your mistakes. If you haven’t  failed at anything, it means you haven’t really taken a risk at anything. Failures are only as bad as you perceive them to be. Life is much better when you live, and try, and fail. Living requires failing every now and then.

I explore this a bit in Walk Facing the Sun, and quote the article that shows that students most successful in college are the ones who were able to recover from failure, from setbacks.

Tomorrow, I'll share my take-aways from Chapter 2 and some reflections on it.

Visit the Texas for Technology Enhanced Education
Everything posted on Miguel Guhlin's blogs/wikis are his personal opinion and do not necessarily represent the views of his employer(s) or its clients. Read Full Disclosure
Book Education Leadership MyNotes SocialMedia