Problem: We are deploying iPads in carts at the high school. Students will only have access to them once per day but we want them to work on projects. How can we make it so that students can log in at the start of the period, then out at the end of the period? We are trying to avoid paying for a solution like eBackpack.

Response:
Are you involved in an iPad deployment with students/staff? Then one of the fun challenges you'll encounter is how to handle documents on the iPads. While GoogleDocs would be a perfect solution, unfortunately, GoogleDocs and iPad's browser just don't quite like each other. This dissonance between the iPad and the Cloud pushes you in some inevitable directions, probably by design (since it makes Apple $$$). Those directions include the following:

The question occurred to me, how hard would it be to connect the iPad via WebDav to a district server-hosted OwnCloud.org installation?

Another approach that was fun to consider is OwnCloud.org, a free open source Dropbox-alternative that you can host on your own server (e.g. UbuntuLinux, Mac and Windows supported). What I like about OwnCloud is that you can drop files on there pretty easily via a web-based interface, share them via a public link with others, and it provides WebDav support...and, the neat part, it works with iPad apps that have WebDav support!

As you can see in the image below, I've copied 3 files from my iPad to the OwnCloud--which I setup on my laptop running UbuntuLinux (more on how later)--and it was pretty awesome! In addition to struggling to find a no-cost, low-cost solution to students archiving data in a "private cloud"--as opposed to Dropbox as a public cloud storage location--I also wanted an easy way to save documents off my iPad onto my computer. OwnCloud makes it possible and easy.

How To Setup UbuntuLinux 12.04 Server
How To Setup OwnCloud WebDav Access on iPad
One of the neat things about WebDav access is that you can open files saved in OwnCloud using your iWorks app. Here's what that looks like: 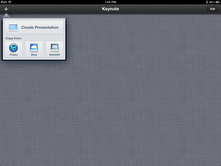 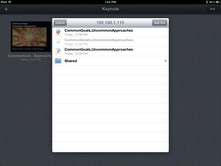 Again, the benefit here is that you can save files from ANYWHERE to OwnCloud--from a PC, Mac, whatever--then open them on your iPad.

What Happens at the end of the period when the student needs to turn in the iPad?

One of the other concerns in deploying iPads in carts at the high school is how do you "sign" students out of the iPad. Signing out of a WebDav--like OwnCloud--is merely a matter of tapping on the "Sign-Out" button that appears when you tap on "Copy to WebDav." 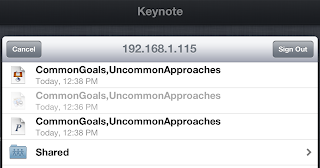 And, it's fairly easy to delete documents students have created on the iPad, as you can see with the Keynote document below...the one with the yellow border is the one I copied from OwnCloud and then deleted (it was the PPT version and unnecessary since I had the original version backed up to OwnCloud). 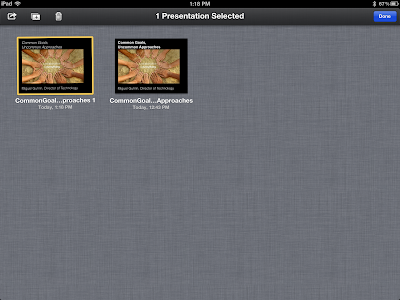 What do you think, a viable solution?

Think this through...what am I missing in terms of deployment with students and staff?

NEXT STEPS FOR DEPLOYMENT
1) Setup OwnCloud on District server

2) Get each iPad iWorks

3) Create individual student accounts on the district-hosted OwnCloud server; this can be done en masse.

4) Give them their login/password info at the start of the year (the URL is the same for all, but login/pwd is unique to the user).

This solution can also be used with BYOD pilot since OwnCloud is accessible via Web and any webdav application...that means laptops/netbooks/desktops/android/iOS can access it.

How might  students/staff use it for iPad and BYOD pilots?

Visit the Texas for Technology Enhanced Education
Everything posted on Miguel Guhlin's blogs/wikis are his personal opinion and do not necessarily represent the views of his employer(s) or its clients. Read Full Disclosure
Education iPads OwnCloud TechTips webdav

Miguel Guhlin (@mGuhlin) said…
Nathaniel, yes, it can be. That is how it's being done in a district I work with.

And, even though I mention it above, you can find more info about it below: http://owncloud.org

From the feature page, you can see:
"Now ownCloud enables admins to manage users and groups from their LDAP or AD instance."

Unknown said…
Now that Google has introduced
Google Drive it works extraordinarily well on an iPad browser. Accessing it just from a browser e.g. Safari gives better functionality than using official Drive app from itunes. I recommend Google Drive as it's available and works across all platforms rather than being locked into iPad/apple locked down environments! for Nathaniel via Google Apps for Education or Business you can link it to LDAP too!
August 1, 2012 at 8:43 PM

"The browser you're using may not support all features of the desktop version of Google Docs."

That said, it would be neat if GoogleDrive enabled documents to be opened in Google Chrome since that would make it possible to edit. I have tried Google Chrome and it works surprisingly well with GoogleDocs.

Still, for a school deployment, I'm sticking with WebDav and Office2 HD with Keynote as the solution to use...until things get better.

Eric Hileman said…
I'm a year late to the conversation, but I recently had the exact same questions as to how to save/receive documents on the iPad. It's the one missing piece to make it a fully functional learning device, for we have to interact with artifacts.

We are exploring enabling WebDAV on our student shares for this very purpose.
June 15, 2013 at 6:35 AM