Showing posts from April, 2012
Show all

5 #iPad Apps for the Itinerant

Whew, over the last few days, it's been horrible suffering on my Macbook. For some reason, the OS is clunky, slow, and though it has pretty pictures, I am definitely missing the command line. While playing around with my iPad, I've had to do some interesting jobs and stumbled on some apps that you may find of interest.
App #1 - SSH Mobile Free For example, while at work (my previous job), after turning in my equipment, I realized I could tweak a setting on the server to improve performance for my team. Rather than go borrow someone else's laptop, run Terminal in Mac or boot from my LubuntuLinux USB flash drive, I decided to see if I could do the job with the iPad.
Sure enough, you can get the job done with the ad-supported SSH Mobile Free. It allows you command line access via SSH to a Linux server.
App #2 - Splice Video Editing As I was looking for great ideas for an iPad intro activity for a staff development, I ran across Mark Wagner's workshop activity that involve…
1 comment
Read more

Learning with the iPad 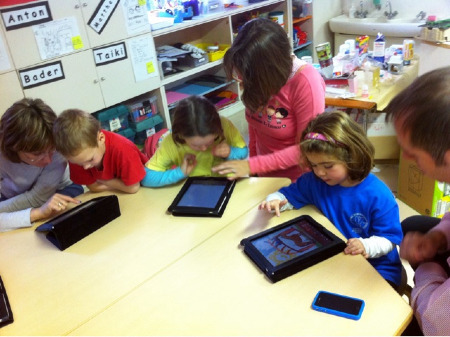 Learning with the iPad
Goal
Provide students with engaged learning opportunities that not only transform delivery, assessment and differentiate the delivery of instruction, but change how students and staff create, collaborate, communicate, as well as develop critical thinking and problem-solving skills in a globally connected environment. Students and staff must develop new literacies--skills, strategies, and dispositions--that enable them to engage in the 4Cs--Creating, Collaborating, and Communicating as they hone Critical thinking and problem solving skills (Source:http://p21.org/overview).