February 20, 2012
Update 02/21/2012: After meditating on this, I finally decided to call TxDIR and ask for their opinion. Although I won't put anyone on the spot, it basically boils down to this: iPad Apps do appear to be a consumable so long as they don't exceed $10,000. Your District Purchasing Department can weigh in on this. So, there, it's settled! 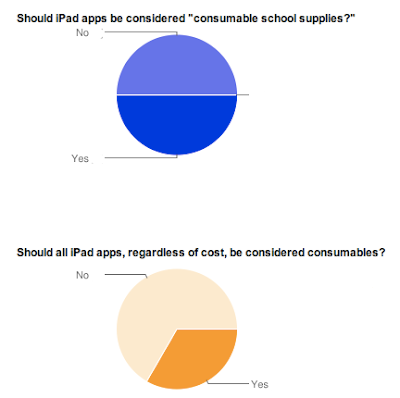 Over the last few weeks, the idea of consumable iPad apps has been a topic for reflection (provide some feedback via this survey). Tim Holt has also reflected on this topic:


It was left up to the individual school district to define what they considered “consumable” because the width and breadth of what is used by the vast number of districts varies so much. If a district were ever audited, they would only have to show that the items that they purchased in the “consumable” category met the criteria of the definition: “a commodity that is intended to be used up relatively quickly.”
But the idea of what is and what is not a consumable is about to be upended, by, as usual technology.


Throwaway apps can have a lasting impact on student and teaching learning, simply because they are consumables that aren't. Also, there are plenty of education-friendly apps.

Let's review the definition of a throwaway app or "tapp:"

An education app, a piece of software, that school districts purchase with taxpayer funds and "throwaway" to the benefit of students and teachers. Should the student or teacher load the "tapp" on their device using their personal iTunes account, the app would belong to the user personally rather than the District. When a new student/teacher arrives, the District has to purchase a new tapp.

These are "tapps" that wouldn't normally be thrown away if the District granted students and teachers license to install software on their personal devices. In the past, teachers and student guardians would have had to sign an agreement stating they would remove the software under certain conditions (e.g. leave the District, graduation, etc.).

These challenges to tapps arise, not because of a change in education or software app manufacturer policy, but rather because the way a vendor (Apple in this case) has chosen to design the way apps for iPod Touch and iPads are delivered to their devices. If we were discussing a Macbook Pro computer, then this would be a moot issue--districts would no more "giveaway" or "throwaway" expensive or inexpensive software than they would the computer itself.

Certain Texas school districts have chosen the approach of throwaway apps as a valid way to manage their iPad deployments. They argue that the cost of apps per student/teacher exceeds an average of no more than $50 a year, a cost easily absorbed by the school district. Furthermore, iPads eliminate the need for other costly consumables that exceed the price of multiple throwaway apps for iPads.

This approach faces some issues, mainly the following:
Still, we have to return to the fundamental question: Do throwaway apps result in enduring learning for students and staff?


It’s why we have to think of what we want them to do as learners, not what can the iPad do. We have to make the iPad suit the learning, not make the learning suit the iPad to justify having it. So think of the skills you want your students to develop and then work out if the iPad can improve that skill. If it doesn’t, don’t use it.

Mark, the author of iPads can't improve learning, refers to note-taking as an example of one place learners can achieving enduring learning:


...you can’t help but see the possibilities for supporting student learning, especially special needs students or just generally struggling students, those who are constantly lost during note taking sessions. The ability to review notes with audio, related diagrams, websites, photos will enable them to access information at their own pace. Teachers can prepare notes with all the supporting AV resources for these students to use during sessions so they can enter into tasks with the more able students independently.The iPad can just be an engaging but expensive replacement for books and handouts. Or it can completely change the way we go about note taking

How do you go about acquiring some of the apps--Goodreader ($5.99) or Notability ($.99)--that Mark refers to in his blog entry encouraging us to move beyond doing things in the same old way with new technology? BTW,  Mark also mentions Evernote, a wonderful app that has great functionality at no cost...of course, since Evernote is web-based, you have to be at least 13 years old according to their new account registration page. To get paid apps easily distributed because Apple doesn't have an approach yet, do you employ the tapps approach or do you do something else?


Other districts in Texas have sought to do something else, bypassing the question of legality with throwaway apps (tapps). Here's one approach two districts I know of have taken:

Campuses use this form to request the apps that they wish to purchase - submitting the name of the app, the developer, the cost per app, and the budget code to be charged. The form is then digitally signed by the campus administrator in Google. (This can be done by showing the revision history. After the administrator types their name, the revision history itemizes edits made by individual users.) [This is clever - Miguel]

Once the form has administrative approval, it is then shared with the Technology secretary who makes the purchases in the Volume Purchase Store. She then submits the appropriate budget codes so that funds can be transferred back into the App line item. Our secretary can now use these funds to buy the next voucher. Once the apps have been purchased, I retrieve the redeem codes from the Volume Purchase Program and distribute them to the appropriate campus. I also keep an inventory of all app purchases and redeem codes by campus in Google Docs.

So far this process is working for our district. It allows campuses to make purchases as necessary, rather than waiting until their purchase totals $100.00 (the minimum voucher size in VPP).

In response to this approach, I asked the following questions:
I still have much to learn about the best practices for managing apps, throwaway or otherwise!
Get Blog Updates via Email!

Visit the Texas for Technology Enhanced Education
Everything posted on Miguel Guhlin's blogs/wikis are his personal opinion and do not necessarily represent the views of his employer(s) or its clients. Read Full Disclosure
Education EverNote iPads TechnologyManagement