My head of school wants to know if it's possible to have Twitter feeds from two different accounts send updates to a Facebook page and if so how this can be accomplished. If this isn't possible, is there a quick and easy way for him to switch the feeds from different accounts off and on?

Response:
Each Twitter account has what is called an RSS feed. This feed can be re-routed easily and multiple feeds posted to Facebook. Here's how you can do it:

Let's say you have 3 Twitter feeds, maybe one for your superintendent/principal, technology director, and/or Communications Director. To accomplish that, you will follow these steps:

1) Create the multiple twitter accounts. For purposes of this example, let's say they are:

Each of these addresses would, theoretically, generate an RSS feed that can funneled through the dlvr.it or ifttt.com account.

For example, in the case of dlvr.it, it would look something like this: 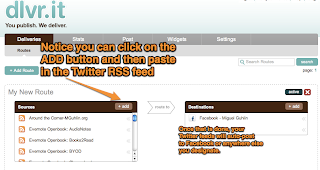 What's neat about this approach is that you can easily blend in multiple RSS feeds--say, maybe pull in twitter accounts for all teachers at your school and run them through ONE instructionally-focused Twitter or Facebook account for your school--to form ONE RSS feed for content. Using these simple techniques, you could also deliver content in a variety of ways to blogs, wikis, etc.

Play around with this approach to select and shape content to re-distribute to others!

Visit the Texas for Technology Enhanced Education
Everything posted on Miguel Guhlin's blogs/wikis are his personal opinion and do not necessarily represent the views of his employer(s) or its clients. Read Full Disclosure
Education RSSMagic TechTips

Azurite said…
I wonder if this method still works, considering Twitter has more or less officially dropped support for RSS? I tried the sample link style you recommended, and it seemed to work for one recipe I created on IFTTT, but not for another--the only difference being the length of the Twitter username.

I read that the new RSS format for Twitter feeds (again unofficial) is this: http://api.twitter.com/1/statuses/user_timeline.rss?screen_name=username

But I'm curious what your specific recipe for IFTTT might be, considering DLVR.IT is a bit different.