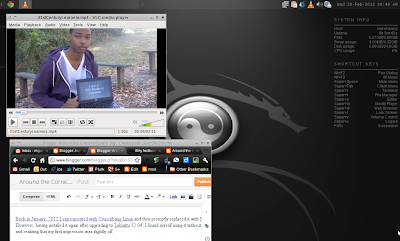 Back in January, 2012 I experimented with Crunchbang Linux and then promptly replaced it with LubuntuLinux. Last night, a bit bored and while reading some dry material, after upgrading LubuntuLinux to 12.04, I decided I didn't like the look-n-feel. So, I found myself installing Crunchbang, using it without problems, and realizing that my first impression was slightly off...it was probably my first experience with Openbox GUI interface (as opposed to GNOME or, yuck, KDE).

The Debian Squeeze-based system seems to be working well, and I only had to make some minor modifications, all handled via GUI menu that's built-in. And, it's hard to convey, but the system is fast on this Dell Latitude E6410!! It will be some time before I decide if I like it better than LubuntuLinux, or PeppermintTwo, which I still have installed on my Macbook. For now, Crunchbang is working smoothly and I only made a few modifications such as add repositories, customized Tint2 to get the clock to display the way I wanted, and added some of my favorite programs (sudo apt-get install shutter libgoo-canvas-perl simple-scan as well as GoogleChrome, LibreOffice, KeepassX and Truecrypt. In truth, GoogleChrome and LibreOffice actually had scripts to help load software faster, in addition to the initial Crunchbang script to make loading miscellaneous software easier (and fast!)).

What's really incredible is that we have full-featured operating systems available for use on computers--old and new--that wouldn't cost schools ANY money, and, more importantly, are easy to share with students. That may explain why Raspberry Pi $25/$35 "computer" sold out so quickly. People are looking for accessible technology that doesn't cost half a grand.


The younger generation may be considered more tech-savvy than their elders, however, knowing how to access social networks or use Microsoft Office applications does not necessarily equate to knowing how the software actually works — a skills gap that many businesses and organisations are now coming across.
The Raspberry Pi is sold uncased and comes with a USB port for a keyboard, an Ethernet port, SD card slot, a HDMI port for video and is able to run a number of systems. In order to use the Raspberry Pi, users must supply their own keyboard and screen.
The $35 version runs as a Linux computer with 256MB RAM — although a £16 ($25) version is in the making and will be available later in the year.
Created by volunteers, mainly from technological and academic circles, the Raspberry Pi Foundation hopes that it will help inspire children to learn how to program.


If you've heard of Scratch from MIT, it's a simple, powerful programming tool for youngsters! It's mentioned as one of the tools in this STEM Digital Design course, and can be installed on Linux. Let me say that again...you can install a powerful tool like Scratch on Linux, which is free. Scratch is also free, so all that you're paying for is a machine. What could we do with students if only we didn't have to buy the latest fad for schools?

Visit the Texas for Technology Enhanced Education
Everything posted on Miguel Guhlin's blogs/wikis are his personal opinion and do not necessarily represent the views of his employer(s) or its clients. Read Full Disclosure
Crunchbang Education FreeSoftware GNU/Linux RaspberryPi

Unknown said…
you keep finding Linux to mix & match and I have yet to make an install flash drive so I can try the UberMix....when & where can I get a Raspberry Pi
February 29, 2012 at 7:13 AM

Josh Davis said…
You can order them here (when and if available):
http://www.element14.com/community/groups/raspberry-pi