Wow, it's been a fun week so far! I've learned a lot and haven't taken the time to write it down. So, allow me to quickly go over some problems and solutions suggested by colleagues:

I have School A, who has Google accounts.
School A people want to connect to Moodle and use Single Sign On. That is, they login to the Moodle using their Google username and password.
Is that possible?
Another way to put it: Google users already exist and i want Moodle to check Google, as if it were LDAP Authentication, before creating the user in Moodle.


Solution:
While Moodle to Google Single Sign On (SSO) solution has been clearly charted, the reverse path didn't appear to be. Thanks to Colin Matheson for answering this one via the MoodleMayhem email list! An excerpt from his response:

It looks like this thread
http://moodle.org/mod/forum/discuss.php?d=85188And this site linked in the thread
http://itvet.org/googaps/


I am now trying this solution out on Moodle 2.1. Cross your fingers with me and let's hope.

By the way, here are some must-read resources for Moodle to Google SSO:


#2 - Storage Solution since Joomla has Failed
A school organization I know has locked down their web server. The reason? Joomla 1.5, which they were running, is apparently easy to hack a la PHP injection, resulting in visitors being routed to web sites fraught with malware. To deal with the solution, the organization has "battened down the hatches" and locked everything on their Red Hat Linux server. What to do, though? Joomla web site maintainers for the organization--over 200--need some place to store their content. That left the organization without a solution for their over 200 site web maintainers to upload documents, images, etc. using the Joomla interface!

Since "fixing security holes" involved a complete lock-down, I suggested placing files on another server that was "secure" and giving people the ability to upload content there. They could always use the absolute link (URL) to the content (e.g. image, PDF) to access it and embed that URL in Joomla editor. Given that the alternative was spending a lot of money on Joomla consultants, they agreed.

At first, I thought I might use Moodle to get this done for them. I even went so far to set it up but the recent Moodle 1.9.5 security update on 11/28/2011 stopped the behavior that allowed for guest access to Files in a Moodle course. What a pain!

During lunch today, I remembered that PMWiki.org--a PHP only wiki, no MySQL needed--has a great self-hosted wiki solution that would work! I use PMWiki for Knowledge Management and other stuff, so I was kicking myself for not thinking about this before!

With the addition of a few add-ons to PMWiki, I had a simple solution that allowed end users to access a single page, upload their documents, images, whatever, but that they had to login to. It looks like this: 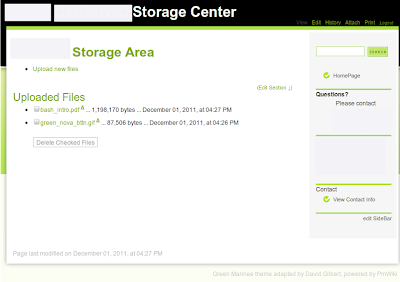 Reflecting on this solution, I'm reminded about how important it is to be aware of the capabilities of all the tools in your arsenal. . .implementing this solution--training the end users--was FAR easier than the Moodle solution I jumped to. And, Moodle was only arrived at extensive efforts at customizing SFTP settings.

#3 - Setting Up an UbuntuLinux Server for Production
What a thrill it's been to set up an UbuntuLinux server for a company on my off-time. I'm still struggling through the process for SSL Certificates and Mail Server, but I'm pleased to report that the setup is working as expected (it was intended for Moodle 2.1 instance). Here are my evolving notes via Evernote (which has been an invaluable aid in keeping track of notes from different web sites); I'm updating them as I go through the process.

#4 - MoodleCourses from Utah
Jon Fila (MoodleShare.com) points to the following:


I know that some of you have been having trouble restoring backup copies from the OHSU. I have been in touch with one of their administrators and she has updated all of the backup copies. I can verify that they do work. I have uploaded and provided backups for all of their courses to http://courses.moodleshare.com 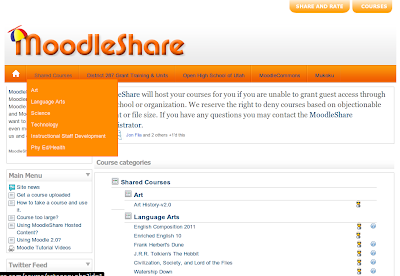 Great stuff, and thanks so much to Colin, Jon, and others who made me think!

Visit the Texas for Technology Enhanced Education
Everything posted on Miguel Guhlin's blogs/wikis are his personal opinion and do not necessarily represent the views of his employer(s) or its clients. Read Full Disclosure
Education GoogleApps Moodle2 Moodle2Tips MySQL PHP UbuntuLinux