The other day, I had to shake myself awake as I pored through my RSS feeds. Certainly, looking at the feeds in GoogleReader isn't as visually engaging as watching a few hundred tweets flit by. At that moment of insight, I realized what blogging had come down to for me--no profound acts of reflection, only moments of whimsy whispered across the ether.


A bad thing? Not really. My brain turns off sometimes, overwhelmed by the sheer volume of information flowing into GoogleReader. In fact, RSS feeds serve as placid pools compared to the burbling, bustling Twitter/Facebook/G+/Plurk streams that combine to wash any coherent thoughts away.

In the next week, we’ll be making some highly requested changes to Google Reader. First, we’re going to introduce a brand new design (like many of Google’s other products) that we hope you love. Second, we’re going to bring Reader and Google+ closer together, so you can share the best of your feeds with just the right circles. (Official Google Reader Blog) via Donald Jenkins

Among those features that will soon be retired are “friending, following and shared link blog inside of Reader.” (Source: Silicon Filter)

And, that first piece of vague news coupled with the second that GoogleReader will morph into something a bit more social sent me running for a free, open source RSS aggregator, RSSOwl, which works on Linux, Mac and Windows.

RSSOwl is something I've come back to, not having mentioned it back in 2009 when I looked at RSS Aggregators (a dying breed of tool)...RSSOwl has certainly improved over the years and will stay installed on my computer.

I am pretty sure people have snickered at my interest in RSS more then once, and even then it’s only when I am in the company of people who know what the hell RSS is, an every shrinking pool of people. All that aside I think Google Reader is a powerful tool, and powerful people use it. (Source: Alex Kessinger)

Well, you're not alone, Alex. I have to admit, it's a bit weird pondering an RSS aggregator you install on your computer, that isn't "cloud-based" and all that. 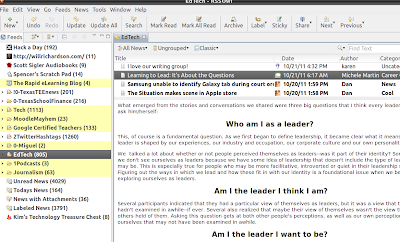 Yet, sure enough, in a second, RSSOwl had imported my GoogleReader feed, and I found myself making connections via blog entries that I never would have seen juxtaposed in G-Reader. While I'll give the new G-Reader a chance, it's nice to be able to take a bird eye's view, to twist the streams and get something new out of them...and the very least, to wake me up again and plant my feet firmly on the ground.

Visit the Texas for Technology Enhanced Education
Everything posted on Miguel Guhlin's blogs/wikis are his personal opinion and do not necessarily represent the views of his employer(s) or its clients. Read Full Disclosure
Blogging FreeSoftware MacOS TechTips UbuntuLinux WindowsOS

Bethany Fillingim said…
I agree that reading through GoogleReader is not always as engaging and interesting to read as twitter is. I am actually new to using Twitter, and it is always interesting to scroll around and view what people from all over have to say. :)
October 24, 2011 at 10:52 AM

myvls.com said…
I have been a long time G Reader user even though I know it needs a upgrade and the link with G+ will be nice I will miss the G Reader I know. I recently created accounts on Bloglines and Feedly to see how they work and enjoy the graphic user interface both have.
What I worry about is that all the teachers I have worked with who now have G Reader account will not be able to use it because G + will not work in their schools. Another reason to dismiss the social network boogie man.
October 25, 2011 at 12:30 PM

Bethany Fillingim said…
This is a great way to prove that teachers need to keep their eyes open on new ideas of technology in order to use the proper tools and have access to each of them. This can place a huge impact on a teacher and cause problems if there is not another way to use and enhance the product into the classroom.
October 25, 2011 at 4:13 PM