When my secretary dropped a copy of Scholastic Administrator on my desk, I had no idea that it would reference some of the hottest leaders in Texas!

Pam Derringer's "Last Week's Technology: How to Balance trends, finances, and teacher and student demands to create a tech plan you can follow" sweeps readers off their feet with a simple bold face, large-print quote from Michael Gras, White Oak (Texas) ISD:

"I don't need a room full of desktops if a kid can do research with the device in his pocket."

Michael goes on to make other wild-eyed claims--that is, claims that leave one wide-eyed rather than imply the lunacy of the claimer--including the following: 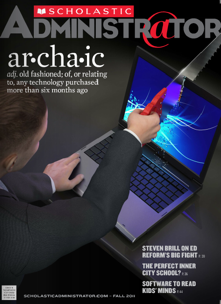 And, Scott Floyd (White Oak ISD), playing Robin to Gras' Batman (at least in this article), isn't left out, getting the final word of the article in:

Of course, Ed Zaiontz (RoundRock ISD) also is quoted and lauded as a pioneer:
Kudos to Texas leaders who have been celebrated in the latest issue of ScholasticAdministrator.com (Fall, 2011).

Of course, the issue would not be complete without mentioning the voice of the counter-culture in the article, an urban technology director forced to sit on the sidelines of a torrent of changes sweeping through schools. Pam Derringer (the author) has placed this "urban technology director" as the voice of what is NOT happening in some school settings due to lack of vision, unwillingness to change, a fixation with the status quo that belongs to yester-year.

Some of the quotes ascribed to the "disgruntled urban technology director" include the following:

Which words best represent YOUR reality? That of Gras, Floyd and Zaointz, as well as others quoted by name in the article, or that of the "disgruntled urban technology director?"

You can read the issue online at http://www.nxtbook.com/nxtbooks/scholastic/administrator_2011fall/

Visit the Texas for Technology Enhanced Education
Everything posted on Miguel Guhlin's blogs/wikis are his personal opinion and do not necessarily represent the views of his employer(s) or its clients. Read Full Disclosure
Education Texas