- July 31, 2011
One of the fun aspects of having a blog is auto-magically posting its content to your favorite social networks, such as Twitter, Plurk, Facebook, and, of course, Google+. Unfortunately, some of these social networks make it easy, while others are just plain difficult. Finding one tool to manage all your social media/networking tools is important, but which? There are lots of choices and folks like lots of different ones, such as the following:

There are other tools, but I've found that running via the Web is the way to go. I like Hootsuite because it allows you to schedule your updates to the network of choice. That's a pretty nifty feature, isn't it, especially for PR folks or school district communications?

IN A NUTSHELL:
To post to twitter/Facebook via RSS, use any one of these tools:


To post to Plurk.com, which can in turn post to Twitter and Facebook, use:
Currently, I do not know of a way to post to Plurk or Google+ via RSS; you have to post it "manually" or in "real time." The rest of this blog entry was my exploration of how to accomplish that.

UPDATE 08/04/2011: Post from Google+ to Anything via RSS
Your public posts on Google+ can be routed via RSS using PlusFeed to Ping.fm or Facebook, allowing you to type something on Google+ and have it appear magically on Ping.fm, Twitter, Facebook, your blog, or whatever.

Remember, the challenge is posting directly to Google+ from RSS feed for a blog, web site, or social networking site where you post updates. Here's how it could work:

The problem with that process, though, is that we usually want content to get into Google+, not get content out to other networks.
ORIGINAL ENTRY:
For example, posting to Twitter and Facebook are a cinch. You can use various tools to get the job done, such as FriendFeed.com, Twitterfeed.com, Ping.fm and Hootsuite.com. How are you getting this done?
Using Networked Blogs...
Using Ping.fm to post to Plurk....
And, of course, the wonderfully talented Twitterfeed.com: 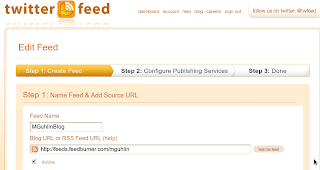 A new addition to the team that I just discovered and couldn't believe worked so easily is Hootsuite.com (here's a tutorial). I had no idea you could drop an RSS feed (only 1 on the free version...I tried doing two, but it balked even though it said 2 were allowed in the free, ad-sponsored account) and then have it publish content to the social networks of choice...except Ping.fm via RSS. Here's a nice walkthrough on how to accomplish that with Hootsuite.
As you can see from my screenshots, Hootsuite.com can publish to Twitter, Facebook, and Ping.fm...and Ping.fm is the tool you can use to publish to Plurk. So, the route to follow is:
What I wish it could do was the following....
Or, if you factor in Google+....
It seems complicated, but in truth, isn't. While I haven't found an easy way to publish to Google+, I hope that Hootsuite will eventually add support. Problem is, it won't work for Plurk...note that in the list of profiles below, Ping.fm isn't one of my choices, even though I have added it as one of my social networks. What a pain. 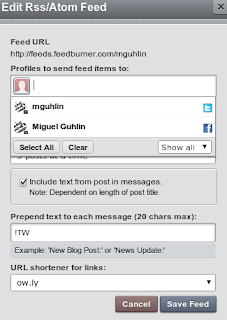 What I like about Hootsuite is that it allows you to manage multiple accounts easily, and the interface (IMHO) is better than Seesmic (which stopped working for me) and Tweetdeck web versions.
You can do this by checking your settings in Hootsuite.com: 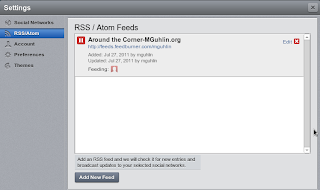 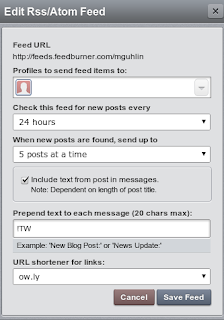 Hootsuite has made it very easy to get it done for Twitter and Facebook, but until it gets Ping.fm, Plurk and/or Google+ support, it's not all that great for mastering social media tools. . .it fails the "one ring to rule them all" test of social media.
So, we're back to Ping.fm for posting to Plurk: 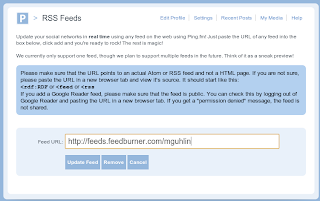 This will feed your RSS feed to Ping.fm and then Ping.fm will post to Plurk....

How are you accomplishing running your Wordpress RSS feed through your social network of choice?

Subscribe to Around the Corner-MGuhlin.org
Everything posted on Miguel Guhlin's blogs/wikis are his personal opinion and do not necessarily represent the views of his employer(s) or its clients. Read Full Disclosure
SocialMedia TechTips