Note: Although at the time I wrote this Google+ Invitations were closed, I did successfully go through the process of importing friends into Google+ Circles. 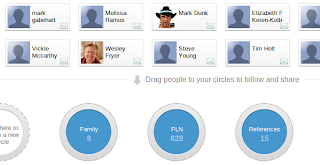 Moving from Facebook to Google+ includes the following challenges:

I'll be updating this post periodically as new tools pop up that make the transition easier. You'll want to check back! 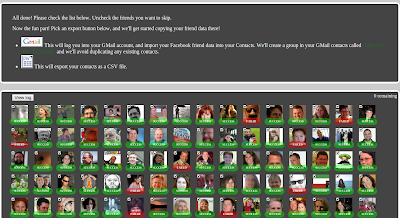 
Update: 06/06/2011 - This news that Facebook is blocking this feature should come as no surprise. I'm glad I took advantage of it, though.

Another challenge is age limits. If you have teens on Facebook, I'm not sure whether you'll be able to get them on Google+. My seventeen year old tried to get on with Google+--I invited her right at the start of Google+--but she was unable to get on due to age restrictions. As such, Facebook remains her main social network simply because that's where her friends are right now...and if age restrictions are in place, that's where they will stay. Still, I'd rather she had access to Google+ because it allows her greater control over how she shares content. And, colleges/universities should also find it easier to manage their student populations!
Google+ makes it very easy to share content with people both IN Google+ as well as outside the network via email (too bad it doesn't allow for Twitter, Plurk, Facebook support yet as alternative ways of sharing). Still, email is great. 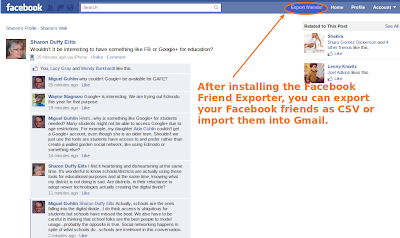 But how do you get people out of Facebook into Google+? Well, since Google+ uses your Gmail as a starting point, if you can export all your Facebook contacts into Gmail, then Google+ can access those. One approach is to use the Facebook Friend Exporter, a Google Chrome browser extension.

After the import, you can check your Gmail and see a new group in your contacts entitled "Imported from Facebook;" here's what it looks like based on a small screenshot that doesn't give away all my Gmail groups:

TOPIC #2 - MOVING YOUR PHOTOS OUT OF FACEBOOK
Looking to move your photos out of Facebook? There's a new tool that can help you get it done-- --that allows you to download all your photos/images as a zip file. The tool is called Pick-n-Zip.
On the page above, you can click a button and add it to your Facebook pages, as explained below:


Adding Pick&Zip - Photo downloader will let it pull your page's profile information, photos, friends' info, and other content that it requires to work. It will also add a box to your page and can publish Feed stories about your page.

Once you add it to your page, it will pop up as shown below: 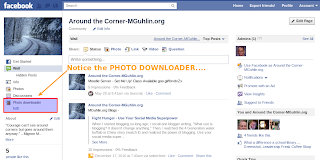 As far as I can tell, you can't just download photos affiliated with your Facebook account...only photos associated with a Facebook Page. For that, you could have tried something like the Facebook Photo Album Downloader but unfortunately, that's just a sad story worth reading. The situation makes one appreciation Google+ all the more.


Here are some workable solutions in order of my preference and ease of use (IMHO):


TOPIC #3 - PAGES/GROUPS ON GOOGLE+
Not yet available, unless you are Ford Motor Company:


The Ford Google+ site had 1,222 followers on Saturday morning and featured posts such as a photo caption contest, a question about what people would like to see out of Ford on Google+, and promotion of a live chat with Ford's director of marketing communications--with a Google+ video-chat hangout afterward.
Read more: http://news.cnet.com/8301-30685_3-20077242-264/ford-wins-a-rare-corporate-foothold-on-google/#ixzz1Rd8mQzsN

Will schools defer to a Google+ Page in favor of managing their own content management systems (e.g. Joomla, Wordpress)?


TOPIC #4 - POSTING TO FACEBOOK FROM GOOGLE+ (Updated 6/10/2011)
Although it's still a "home-grown" solution, Emlyn O'Regan has created a solution called SYYNCC that allows you to post to Facebook and Buzz from Google+. You can see it in action here:
http://my.syyn.cc


As always with any individual's solution, you may have privacy concerns. Fortunately, SYYNCC uses OAuth, which is a  way of authorizing Google+, Buzz without having to type in your password if you are already logged in to Google+. For Facebook, you have to allow access as an app. You retain control over what you allow to access and, no private info is shared.


I've asked Emlyn if he will be sharing this solution for hosting on one's own server, but this certainly sounds like a solution to try if you are desperate to switch to G+ now before Google or others have developed their API. Kudos to Emlyn for his hard work!


MISCELLANEOUS GOOGLE+ STUFF
And, completely unrelated, some tips on getting around Google+

Subscribe to Around the Corner-MGuhlin.org
Everything posted on Miguel Guhlin's blogs/wikis are his personal opinion and do not necessarily represent the views of his employer(s) or its clients. Read Full Disclosure
Facebook GooglePlus TechTips