July 29, 2011
Earlier today, a colleague at a university sent me an email asking for help (actually, the second one in two day from different folks!). The problem was that the edit button on the summary section in the topic list of a Moodle course was not editable.

Here's the problem as it was described to me:

Even though many are worrying about 2.0 install issues, I took your advice and just did an upgrade to the latest 1.9. I have a problem that may be an issue for other moodle administrator's as well. In Moodle 1.9, I had a teacher open the top box, the header, and do a manual cut-and-paste into that section, without uploading a graphic file. What it did was "freeze" that area, so I cannot get into that section and delete the graphic. How can I get to that section to make edits?

Fortunately for this Moodle course, the problem has been encountered before (although this was a first for me!), as I found out after an extensive google search (2 minutes):


This was only one of a handful (less than 5) experiences with a Moodle bug, and thankfully, like all the previous encounters, the Moodle folks had solved the problem for me already. All that needed to be done in this particular case was to get a copy of the revised or "patched" editsection.php which exists in the moodlefolder/course path. Supposedly, you can replace that ONE file and it all will work.

So, I did. Here is what it looks like: 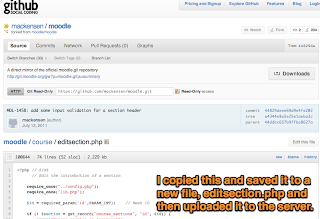 Unfortunately, this issue is still unresolved but there is a low-tech way to fix it without editing MySQL.

Realizing that each edit button in a course has an ID, I copied and pasted the edit code:

Then, after reviewing the numbers for the other edit buttons...which you can do by pointing your mouse at them and seeing what value pops up in your browser's status bar (bottom left on Chrome browser), you can see that the numbers are in a particular "area."

So, after doing that, I made an educated guess at the ID number for the edit button (shown above). The window popped right up with the edit:

I removed the offending HTML and then saved the changes. Voila, it works! Here is what success looks like:

Note that "Edit Summary" now appears as a possibility, when before, you couldn't do anything. I verified this approach by backing up a course with the same issue, then restoring it and trying it again. Worked twice!

Was there a better way to solve this problem?

Subscribe to Around the Corner-MGuhlin.org
Everything posted on Miguel Guhlin's blogs/wikis are his personal opinion and do not necessarily represent the views of his employer(s) or its clients. Read Full Disclosure
Moodle MoodleConversations MoodleTip