Note: Yes, this is yet another post about running GNU/Linux. Should I be blogging about something more serious? Well, no. I'm having too much fun and this is a nice distraction from the realities of job loss, the destruction of schools and human infrastructure, and a million other things, so consider it a pleasant vacation.

I'd like to say, "Installing Peppermint ICE on my Macbook was impossible, an adventure in suffering," but it is the furthest from the truth. In fact, having installed Peppermint ICE on various computers--old to new--the last on my list was my personal Macbook, the one I carry around to do my presentations and that I bought in 2007 prior to my trip to New Zealand, a place that hasn't invited me back but that every memory whispers. One could say, I've experienced heaven but got sent back down the long tunnel.
Wes Fryer, who allowed me to dog his steps for a bit during TCEA in 2007, listened as I extolled the virtues of a PC laptop designed to run UbuntuLinux. It was a beauty of a machine, one that I was sure would last through the years. I scarce remember it now. Somehow, with a snap of his fingers, he forced me away and the next thing I remember, I was looking at Macbooks...and later, I bought one.
At the time--and perhaps, even now--GNU/Linux just doesn't handle multimedia embedded in presentations well.  I wish it did, for then, I'd dump Snow Leopard into the trash and never look back. Still, there's an elegance to a white Macbook that's travelled far. And, though I partitioned the hard drive, leaving 10 gigs for GNU/Linux, I can honestly say, I've never had an install work so easily as Peppermint ICE. . .it was a joy to setup.
Running Chromium, Shutter, here's what htop reveals in terms of memory usage; without the two apps, memory usage was down in the 440s. 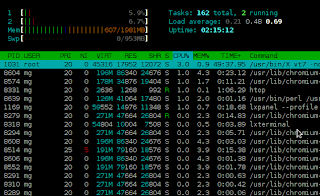 This Macbook, not to mention the Macbook Pro I use at work, are the two best machines I've ever had. It's hard to believe they are growing old.

Subscribe to Around the Corner-MGuhlin.org
Everything posted on Miguel Guhlin's blogs/wikis are his personal opinion and do not necessarily represent the views of his employer(s) or its clients. Read Full Disclosure
MacOS PeppermintICE