It must be my destiny to read the sequel to the blockbuster book on leadership every time; I picked up a copy of Crucial Confrontations thinking it was Crucial Conversations. Although I'll pick up the latter this afternoon, here are my notes on the former. I have to admit that the book, as engaging as it was, didn't capture my interest as much as Susan Scott's Fierce Conversations. That said, there were a few worthwhile points relevant to anyone who has to work in a team setting (e.g. work, marriage, you name it, most of us do unless we're isolated somewhere without technology). 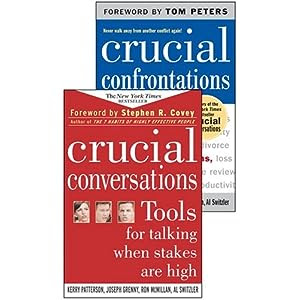 At the office, the books by "Crucial Conversations" and "Crucial Confrontations" are popping up. More straight talk is how I interpret the intent of these books. Often straight talk is exactly what IS lacking in much of what we do in schools. I often think poor teachers don't hear that they ARE poor because we don't want to call down the wrath of union or legal representation (depending on the State of the Union you work in).

In that case, we have a simple situation, right? On the one hand we have the staff, on the other the academic measure or standard the children have to live up to. What could be simpler than that?

Some take-aways from Crucial Confrontations:
Obviously, there's a lot more to the book than the notes I jotted down above.

Everything posted on Miguel Guhlin's blogs/wikis are his personal opinion and do not necessarily represent the views of his employer(s) or its clients. Read Full Disclosure
Book MyNotes

Click Labs said…
Crucial Confrontations now availabe for you iPhone or iPad. Check this new app and take this amazing book with you everywhere! Download the complete book and audiobook here: http://itunes.apple.com/us/app/crucial-confrontations/id455489814?mt=8
November 4, 2011 at 2:07 AM

Lucie deLaBruere said…
Thanks for the great summary, Miguel. The part I think is crucial for crucial confrontation is TRUST and building trust is a two way process that is not always easy to understand.
February 8, 2015 at 9:33 AM