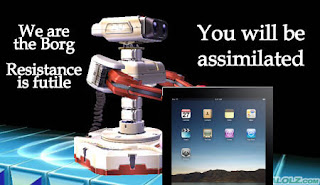 Image adapted from HaloLZ.com
Earlier today, I had an intriguing exchange with Jeremy Fluhmann (Wandering Knowledge), who shared how he is able to run Windows on the Apple iPad. Pretty interesting, huh?

I promptly sent him a list of questions and he was kind enough to respond. Apparently, he is able to run Windows and accompanying applications on a variety of platforms using their VDI solution. He said, it "allows us to run our images on iPads, iPod touches, and iPhones, should students or staff bring those devices to school." He currently has 550 Windows-based computers deployed in his school district.

Jeremy makes the point that using VDI enables him to overcome the limitations of any particular tablet device. He puts it this way:


When deploying a tablet of any kind, the user is limited by the device's hardware, such as memory and processor.  By integrating a VDI solution with a tablet, we can now provision a session for high-end apps, such as CAD that may require 16GB of memory, to a tablet user.  We're not necessarily bound to the tablet's resources, although some would argue that you shouldn't be running those types of apps from a tablet anyway.  It lets us be more flexible.

Some might argue that it also allows him to impose the limitations of the software available via the VDI solution on more powerful devices, such as the iPad.

In response to the question of how he accomplished the deployment, Jeremy shares the following insights:


We are able to provide Windows and Linux desktop images to iPads via our virtual desktop infrastructure solution from Virtual Bridges (based in Austin, TX).

The iVerde app is available in the apps store and can connect to our infrastructure using the student or staff login, which then launches a session, based on whatever image(s) has been provisioned for the user.

This would be the same image they can get whether connecting from home or school using a desktop machine running Windows, Linux, or Mac.

My final question to Jeremy was: Some would argue that deploying Windows via iPad is a bit counter-intuitive. After all, isn't the benefit of the iPad dependent on its Apple operating system?


Right, so one of the major benefits is that now students and staff can run basically ANY app from their iPad without being dependent on Apple's operating system and apps in the app store.  This brings everything on to one device.

So, what do you think? Is this the equivalent of "borging" the iPad?

Everything posted on Miguel Guhlin's blogs/wikis are his personal opinion and do not necessarily represent the views of his employer(s) or its clients. Read Full Disclosure
Education FreeSoftware iPads JeremyFluhmann